Pizza Hut is known for their tasty, and sometimes, greasy, pies, but did you know they also sell items such as the “Crown Crust Carnival” and / or the “Scallop Cheesy Volcano”? If not, you’re in luck as we’ve rounded up five of the weirdest items you probably never knew existed, for your viewing enjoyment. Continue reading to see them all. 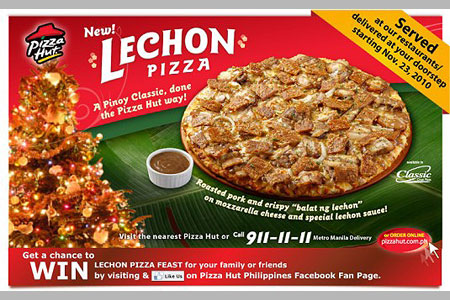 Finally, lechon fans can rejoice! For those who have no idea what it is, this refers to a pork dish found in several regions of the world, namely Spain, Philippines, Cuba, the Dominican Republic, and Puerto Rico. This Philippines-exclusive Pizza Hut item features the restaurant chain’s “Classic Crust, layer after layer of traditional lechon sauce, premium lechon meat, delectable cheese, and garlic roasted to sweetness; finishing it off with a generous portion of that wonderfully crispy balat ng lechon.”

Available exclusively in Japan and South Korea, the “Shrimp Roll” pizza is exactly as it sounds – “a ring of shrimp with tails dangling in the air and heads swaddled in tubes of cheese-stuffed dough.” As strange as this one sounds, it looks quite delicious, or at least for the seafood lovers.

Hankering for a late night pizza and want it with a seafood twist? Well, the “Scallop Cheesy Volcano” from Pizza Hut may be just what you’re looking for. There “are little cheese-stuffed balls bubbling out a lava of cheddar and mozzarella (creating the eponymous volcanos), encircling the creation menacingly and preventing the scallops from even thinking about any last-ditch attempts at escape.”

Think of Pizza Hut’s “Crown Crust Carnival” as a party for your mouth because it consists of “perfectly grilled mini-cheeseburger gems, nestled in golden crown crust.” That is just the beginning, as you’ll also find “beef, lettuce, tomato, and Pizza Hut’s ‘special sauce'” Fortunately (or unfortunately), there are no plans to bring this mashup stateside. 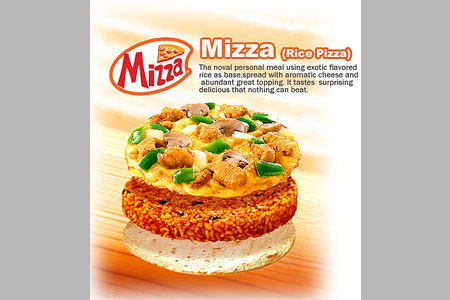 The Mizza was probably one of the only rice pizzas to be offered anywhere, and with that said, this item is essentially “a healthy take on pizza that replaces the crust with a thick patty of rice. It’s like a bowl of rice topped with stuff–except shaped differently.”