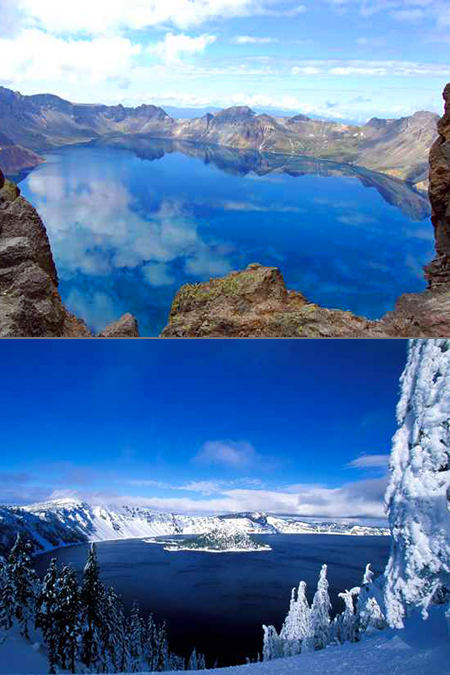 For those who’ve never heard of a volcano lake, or crater lake, it refers to a lake that forms in a volcanic crater or caldera, such as a maar; less commonly and with lower association to the term a lake may form in an impact crater caused by a meteorite, or in an artificial explosion caused by humans. Continue reading to see five of the most stunning crater lakes ever.

Taal Lake is a freshwater lake in the province of Batangas, on the island of Luzon in the Philippines. The lake fills Taal Caldera, a large volcanic caldera formed by very large eruptions between 500,000 and 100,000 years ago. It is the country’s third largest lake after Laguna de Bay and Lake Lanao.

Lake Toba is a lake and supervolcano. The lake is 100 km long, 30 km wide, and up to 505 m (1,666 ft) deep. Lake Toba is the site of a massive supervolcanic eruption estimated at VEI 8 that occurred 69,000 to 77,000 years ago, representing a climate-changing event. It is the largest known explosive eruption on Earth in the last 25 million years.

Crater Lake is a caldera lake located in the south-central region of the U.S. state of Oregon. It is the main feature of Crater Lake National Park and famous for its deep blue color and water clarity. While having no indigenous fish population, the lake was stocked from 1888 to 1941 with a variety of fish. Several species have formed self-sustaining populations.

Lake Nyos is a crater lake in the Northwest Region of Cameroon, located about 315 km (196 mi) northwest of Yaounde. Nyos is a deep lake high on the flank of an inactive volcano in the Oku volcanic plain along the Cameroon line of volcanic activity.

Heaven Lake is a crater lake on the border between China and North Korea. It lies within a caldera atop the volcanic Baekdu Mountain, a part of the Baekdudaegan mountain range and the Changbai mountain range. The caldera which contains Heaven Lake was created by a major eruption in 969 CE.

What the First Swiss Army Knife Probably Looked Like