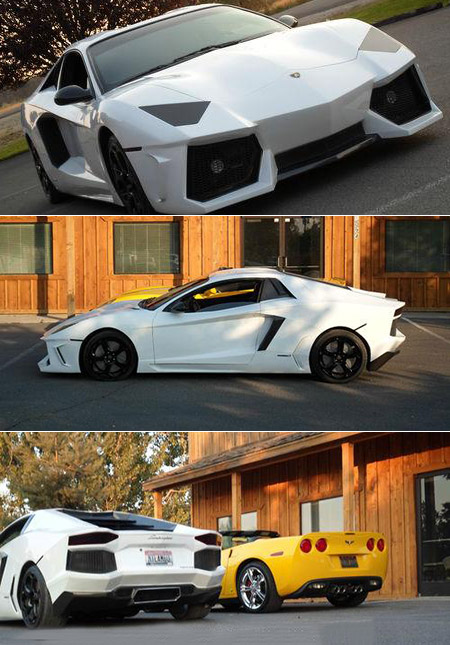 Let’s face it, the Lamborghini Aventador replica that you see above isn’t fooling anyone, even someone who knows absolutely nothing about supercars. It’s based on a Holden chassis, and powered by an LS1 V8 engine that generates 400 hp, mated to a 6-speed manual gearbox. The custom-made body has all the wrong dimensions, but has a similar pearl white paint found on the real vehicle. Continue reading for more.

Since this Enzo is probably the most passable of the bunch, it’s first on our list. Not just a shell, this replica has a BMW 850i-sourced V12 5.0L engine that generates 400hp, mated to a 6-speed manual gearbox. It measures 4700mm long, 2030mm wide and 1140mm tall, with a 2650mm wheelbase and a “glass fiber and carbon fiber composite body.” One cool feature is its exhaust system, which was taken from an original Ferrari F50. Other parts include 8-piston brake calipers up front, six-piston calipers in the back, and 19-inch alloy wheels riding on Continental tires measuring 255/30 ZR 19 front and 315/25 ZR 19 back.

The owner of this Ferrari 458 Italia believed it was good enough to pass as real, so he placed it on AutoTrader for $80,600 USD. Fortunately, this one actually contains parts sourced from the real vehicle. While no specific donor car was mentioned, we do know that it’s a year 2000, has 51,000-miles on the odometer, and boasts a 2.5L V6, complete with Ferrari engine cover. It rolls on 20″ black alloy wheels and sports orange “Ferrari” brake calipers.

If you’ve always wanted a Rolls-Royce, the thought of purchasing this $49,900 Lincoln Towncar-based replica should never cross your mind. Sporting a Braggadocio Blue and Royale Gold exterior paint scheme, the horrible replica offers gold-plated 20″ Dayton wheels with gold Swarovski crystals and plenty more “bling”. It’s got 37,000 miles on the odo and is officially called the “Phantom Pharaoh.”

An auto shop from China decided to recreate the Pagani Huayra, but apparently, they used someone’s description of the car, rather than model it after the real thing. For starters, there is no such thing as a Huayra roadster (yet) and the lack of a central quad exhaust. Next, the limo-tinted windshield is far too narrow to serve any use.

If you don’t want to shell out a million for a used Bugatti Veyron, there’s always the option of picking up a replica, but just stay away from this one in Lithuania. Based on a 1997 Audi A6, this knockoff is powered by a 2.8L V6 that pumping out 200 PS (147 kW), paired with a 6-speed manual and quattro all-wheel drive.