The Wow! signal was essentially a strong narrowband radio signal detected by Jerry R. Ehman on August 15, 1977, while he was working on a SETI project at the Big Ear radio telescope of Ohio State University. It lasted for the full 72-second window that Big Ear was able to observe it, but has not been detected again. Amazed at how closely the signal matched the expected signature of an interstellar signal in the antenna used, Ehman circled the signal on the computer printout and wrote the comment “Wow!” on its side. This comment became the name of the signal. Continue reading for more strange mysteries. 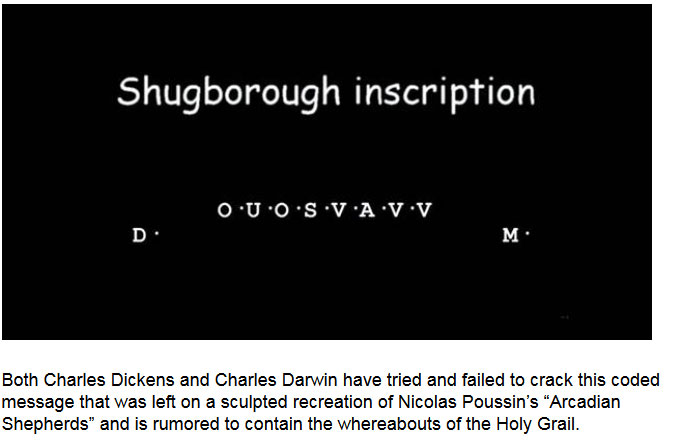 The Shugborough inscription is a sequence of letters – O U O S V A V V, between the letters D M – carved on the 18th-century Shepherd’s Monument in the grounds of Shugborough Hall in Staffordshire, England, below a mirror image of Nicolas Poussin’s painting, the Shepherds of Arcadia. It has never been satisfactorily explained, and has been called one of the world’s top uncracked ciphertext. Josiah Wedgwood, Charles Darwin and Charles Dickens are all said to have attempted to solve the enigma and failed. No solution has yet been proposed which rests on a solid cryptanalytic footing. 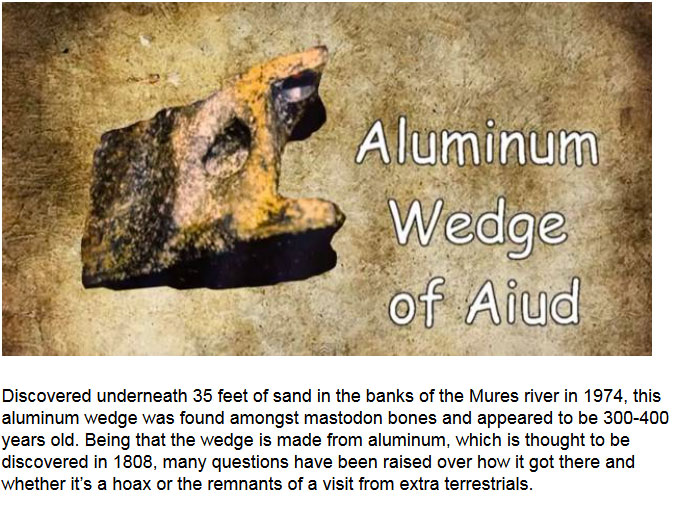 The Object of Aiud is basically a wedge-shaped object found 2 kilometers East of Aiud, Romania, on the banks of the Mures river in 1974. According to researcher Boczor Iosif, a contributor to Hungarian paranormal magazines, it was found under 35 feet of sand and alongside 2 mastodon bones, in 1973. This object was taken to the Archeological Institute of Cluj-Napoca to be examined, where it was found to be made of an alloy of aluminum, and also encased in a layer of oxide no less than a millimeter thick, which is said to indicate an age of at least 300-400 years old. 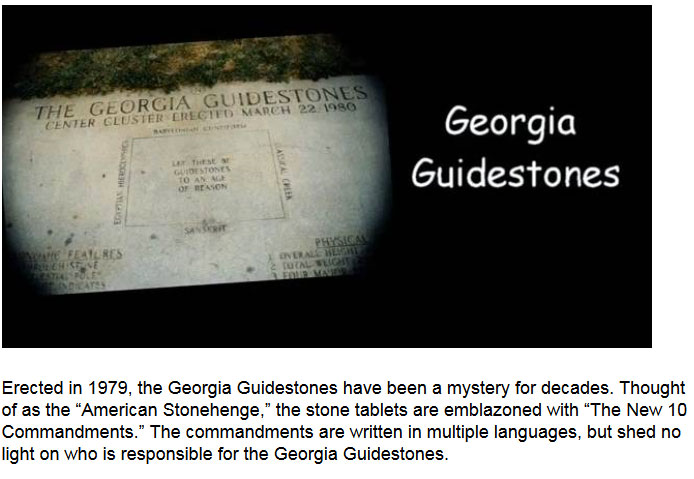 The Georgia Guidestones is a granite monument in Elbert County, Georgia, in the United States. A message clearly conveying a set of ten guidelines is inscribed on the structure in eight modern languages, and a shorter message is inscribed at the top of the structure in four ancient language scripts: Babylonian, Classical Greek, Sanskrit, and Egyptian hieroglyphs. In June 1979, an unknown person or persons under the pseudonym R. C. Christian hired Elberton Granite Finishing Company to build the structure. 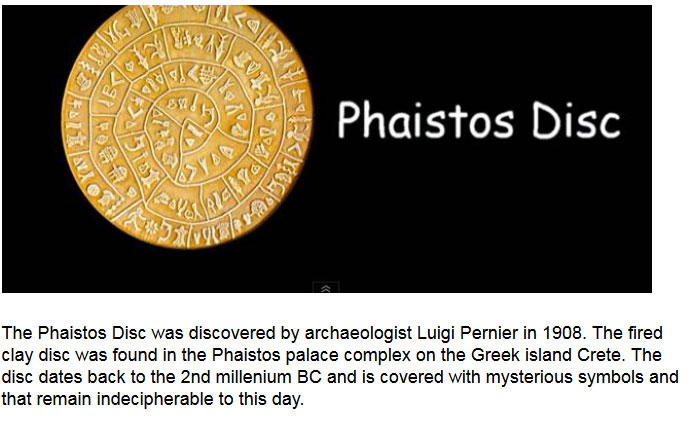 The Phaistos Disc is a disk of fired clay from the Minoan palace of Phaistos on the Greek island of Crete, possibly dating to the middle or late Minoan Bronze Age (2nd millennium BC). It is about 15 cm (5.9 in) in diameter and covered on both sides with a spiral of stamped symbols. Its purpose and meaning, and even its original geographical place of manufacture, remain disputed, making it one of the most famous mysteries of archaeology. This unique object is now on display at the archaeological museum of Heraklion. Attempts at decipherment are generally thought to be unlikely to succeed unless more examples of the signs are found, as it is generally agreed that there is not enough context available for a meaningful analysis.

Kryptos is an encrypted sculpture by the American artist, Jim Sanborn, that is located on the grounds of the Central Intelligence Agency (CIA) in Langley, Virginia. Since its dedication on November 3, 1990, there has been much speculation about the meaning of the encrypted messages it bears. Of the four messages, three have been solved, with the fourth remaining one of the most famous unsolved codes in the world. The sculpture continues to provide a diversion for cryptanalysts, both amateur and professional, who are attempting to decipher the final section. The sculptor has given clues on several occasions.

The Bermuda Triangle, also known as the Devil’s Triangle, is a loosely defined region in the western part of the North Atlantic Ocean, where a number of aircraft and ships are said to have disappeared under mysterious circumstances. According to the US Navy, the triangle does not exist, and the name is not recognized by the US Board on Geographic Names. Popular culture has attributed various disappearances to the paranormal or activity by extraterrestrial beings.

In 2011, a team, working on a documentary for the National Geographic Channel, led by Professor Richard Freund from the University of Hartford, claimed to have found evidence of Atlantis in southwestern Andalusia. The team identified its possible location within the marshlands of the Donana National Park, in the area that once was the Lacus Ligustinus, between the Huelva, Cadiz and Seville provinces, and speculated that Atlantis had been destroyed by a tsunami, extrapolating results from a previous study by Spanish researchers, published four years earlier.