What sets the Otton frog apart from the others are its hidden spikes, which protrude from a false thumb for both combat and mating, similar to Marvel’s Wolverine. According to Dr. Iwai, both males and females have the spike, though it’s only used by males. Continue reading for one more picture and additional information. 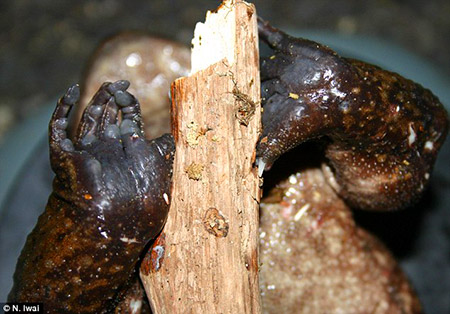 ‘The males demonstrated a jabbing response with the thumb when they were picked up, and the many scars on the male spines provided evidence of fighting.’ The conditions on the Amami islands make combat, and the need for weaponry, a key factor for the frogs’ mating success. Individuals fight over places to build nests, while the chances of a male finding a mate each night are rare, thus the ability to fight off competitors may be crucial.

Perhaps unfortunately, the comic book hero image is slightly dented by the frogs’ fighting style. Rather than dueling with thumb spikes the males wrestle each other in an embrace, jabbing at each other with the spines. This fighting style helps confirm the theory that the spines were original used for embracing mates. ‘More research is needed to look at how the pseudo-thumb evolved and how it came to be used for fighting,’ concluded Dr Iwai.