Astronauts Liu Boming and Tang Hongbo successfully completed their first spacewalk of the Tianhe space station construction stage, the second spacewalk in China’s history since the Shenzhou-7 mission in 2008. In this extravehicular activity (EVA) session, they donned new space suits to install important equipment, including a 10-meter-long robotic arm that will be used for moving space modules in the future. Read more for a video and additional information.

A third astronaut, commander Nie Haisheng, stayed inside during this spacewalk. However, Liu and Tang took around 7-hours to finish installing the necessary equipment that will be used on future missions. They are currently staying in Tiangong space station’s first module, Tianhe (Heavenly Harmony), which was launched April 29 and then followed by an automated spacecraft with food as well as fuel. 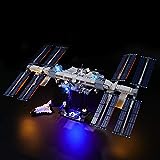