Hasbro, Inc. partnered with Universal Brand Development and Amblin Entertainment today to reveal the first-ever Transformers-Back to the Future collaboration, starring the all new GIGAWATT. This new time-traveling Transformers Autobot commemorates 35 years since the groundbreaking adventure film, Back to the Future, took audiences back in time. Read more for a 20 things you might have missed in Back to the Future movies video and additional information.

Limited to just 1985-pieces worldwide, this robot stands at 5.5-inches tall in Robot mode and can transform to Time Machine mode in 17 steps. Plus, it includes a blaster and whip antennae accessories, while boasting movie-inspired details from the film, including Doc Brown-style goggles, a flux capacitor chest piece, as well as time circuits. Once time machine mode is activated, the gullwing doors open and wheels rotate from vertical to horizontal to produce a hovering effect as seen in the films. Available on October 1, 2020 at select retailers. 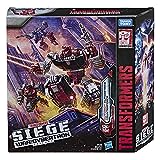 TRANSFORMERS robots have always been more than meets the eye, but now, through the TRANSFORMERS Collaborative, fans can experience these larger than life characters as they team-up, mash-up, and meet up with other characters, teams and people who share this same special quality. It is a world of constant change where things are not what they seem,” according to Hasbro.