Photo credit: Marc Thorpe
Your eyes aren’t playing tricks, Marc Thorpe has proposed an installation for the city of Marfa, Texas titled “Citizens of Earth,” and it’s not to pay tribute to flying saucers, but rather show why international borders are useless in the 21st century. It would be located in a desert community around 20-miles outside of Marfa, right on the border of Mexico and the United States. Read more for another picture and additional information. 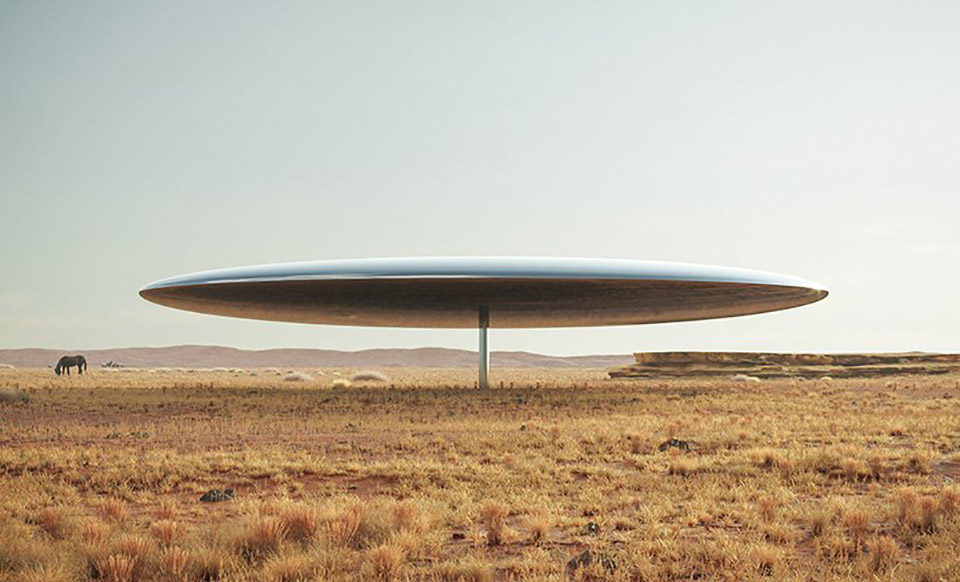 Thorpe was also inspired by the the Kenneth Arnold UFO sighting, which occurred on June 24, 1947, when private pilot Kenneth Arnold claimed that he saw a string of nine, shiny unidentified flying objects flying past Mount Rainier at speeds that Arnold estimated at a minimum of 1,200 miles an hour. It marked the first post-War sighting in the United States that garnered nationwide news coverage and is credited with being the first of the modern era of UFO sightings and led to the press quickly coining the terms flying saucer and flying disc.

The military strategy of divide and conquer is being implemented around the globe by governments, corporations and the media in an attempt to separate us by stressing our differences. Feeding on division, insecurity and fear pushing us further into isolated corners of apathy and indifference towards our neighbor. So the question becomes, what if there were no more borders?,” said Thorpe.