In the Star Wars universe, R2-D2 is a robot character, but fanatic DOUG decided to pay tribute to the astromech droid by creating a custom electric guitar modeled after the character. R2-D2 joins or supports Anakin Skywalker, Luke Skywalker, Princess Leia, and Obi-Wan Kenobi in various points in the saga. R2-D2 was played by Kenny Baker. Along with Anakin Skywalker (Darth Vader), Obi-Wan Kenobi, and C-3PO, he is one of only four characters to appear in all six Star Wars films. Continue reading for one more picture. 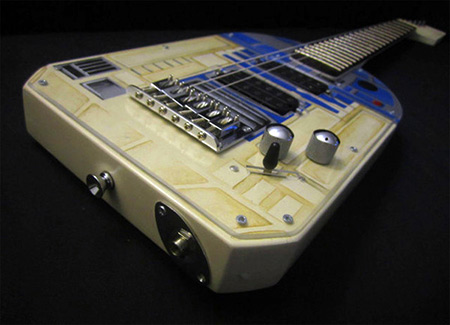 R2-D2 was designed by John Stears and Tony Dyson, with models specifically created by the Australian firm Petric Engineering and the English firm C&L Developments. Many scenes also made use of radio controlled and CGI versions of the character. Original props of R2-D2 and C-3PO are used as audio-animatronics in the queue area of Disneyland’s Star Tours: The Adventures Continue attraction.

Fascinating Look at James Cameron’s Dive Into the Mariana Trench, Deepest Part of the Ocean