The Domus Aurea was basically a vast landscaped palace built by the Emperor Nero in the heart of ancient Rome after the great fire in 64 AD had destroyed a large part of the city and the aristocratic villas on the Palatine Hill. Architects designed two of the principal dining rooms to flank an octagonal court, surmounted by a dome with a giant central oculus to let in light. Only fragments have survived, but that technique was to be copied extensively, eventually ending up as a fundamental feature of Christian art: the apse mosaics that decorate so many churches in Rome, Ravenna, Sicily and Constantinople. Continue reading to see more historical ruins reconstructed back to their former glory. 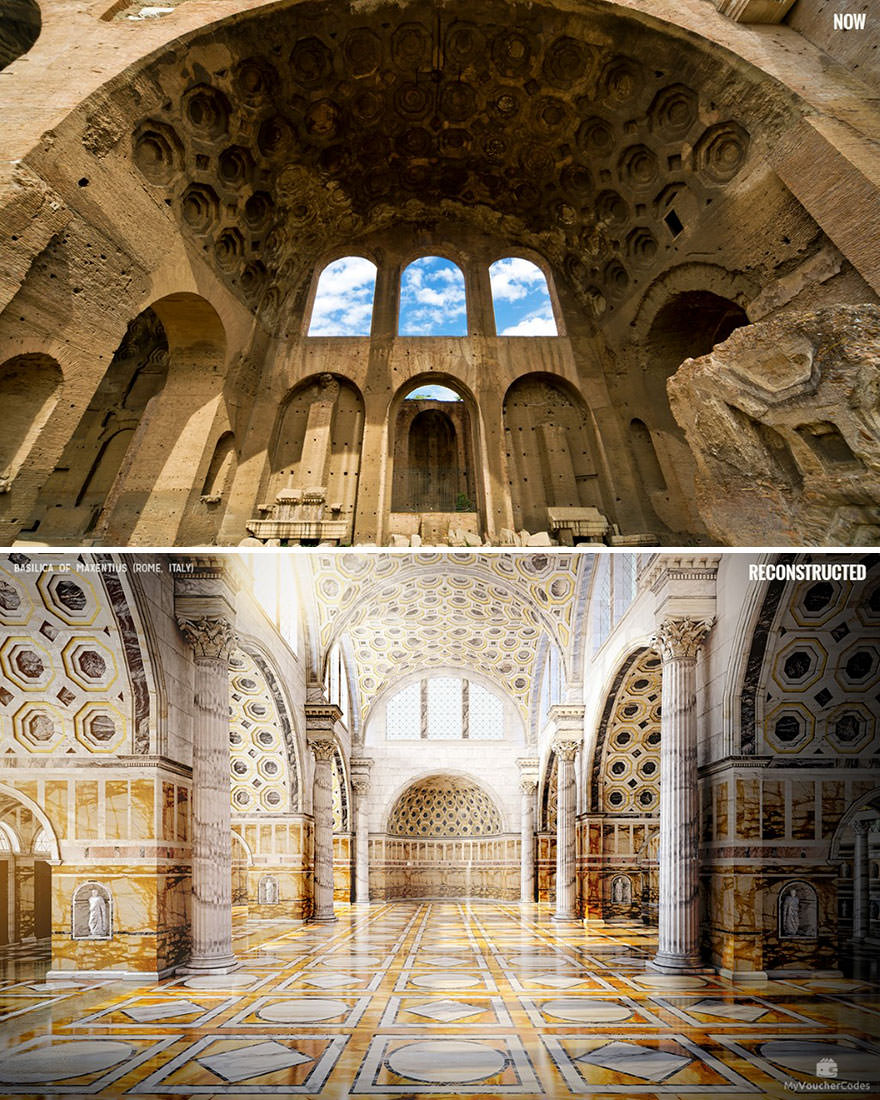 The Basilica of Maxentius was the largest building in the Forum, and construction began on the northern side of the forum under the emperor Maxentius in 308, and was later completed in 312 by Constantine I after his defeat of Maxentius at the Battle of the Milvian Bridge. The building rose close to the Temple of Peace, at that time probably neglected, and the Temple of Venus and Rome, whose reconstruction was part of Maxentius’ interventions. The aisles were spanned by three semi-circular barrel vaults perpendicular to the nave, and narrow arcades ran parallel to the nave beneath the barrel vaults. The nave itself measured 25 metersby 80 meters (83 x 265 feet) creating a 2000 square meter floor. Like the great imperial baths, the basilica made use of vast interior space with its emotional effect. 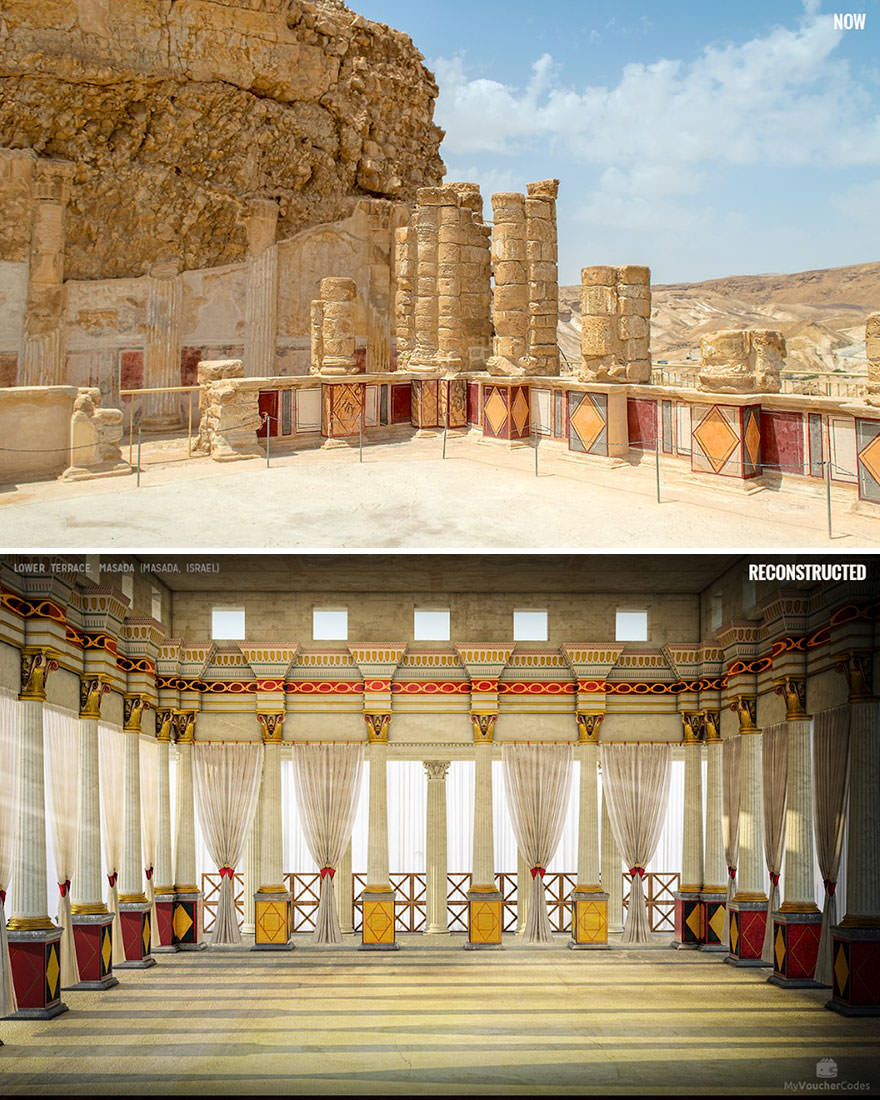 Masada is an ancient fortification in the Southern District of Israel situated on top of an isolated rock plateau, akin to a mesa. It is located on the eastern edge of the Judaean Desert, overlooking the Dead Sea east of Arad. Herod the Great built palaces for himself on the mountain and fortified Masada between 37 and 31 BCE. The lower terrace was also for receptions and banquets. It was enclosed on all four sides with porticos and included a Roman bathhouse. 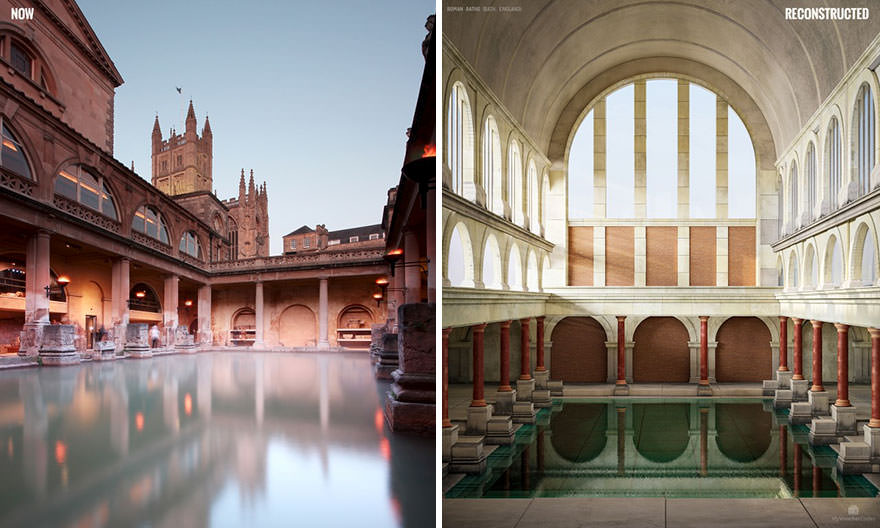 The Roman Baths complex is a site of historical interest located in the English city of Bath, below the modern street level. There are four main features: the Sacred Spring, the Roman Temple, the Roman Bath House and the museum, holding finds from Roman Bath. The buildings above street level date from the 19th century. It’s a major tourist attraction and, together with the Grand Pump Room, receive more than one million visitors a year.You can visit the baths and museum today, but cannot enter the water. 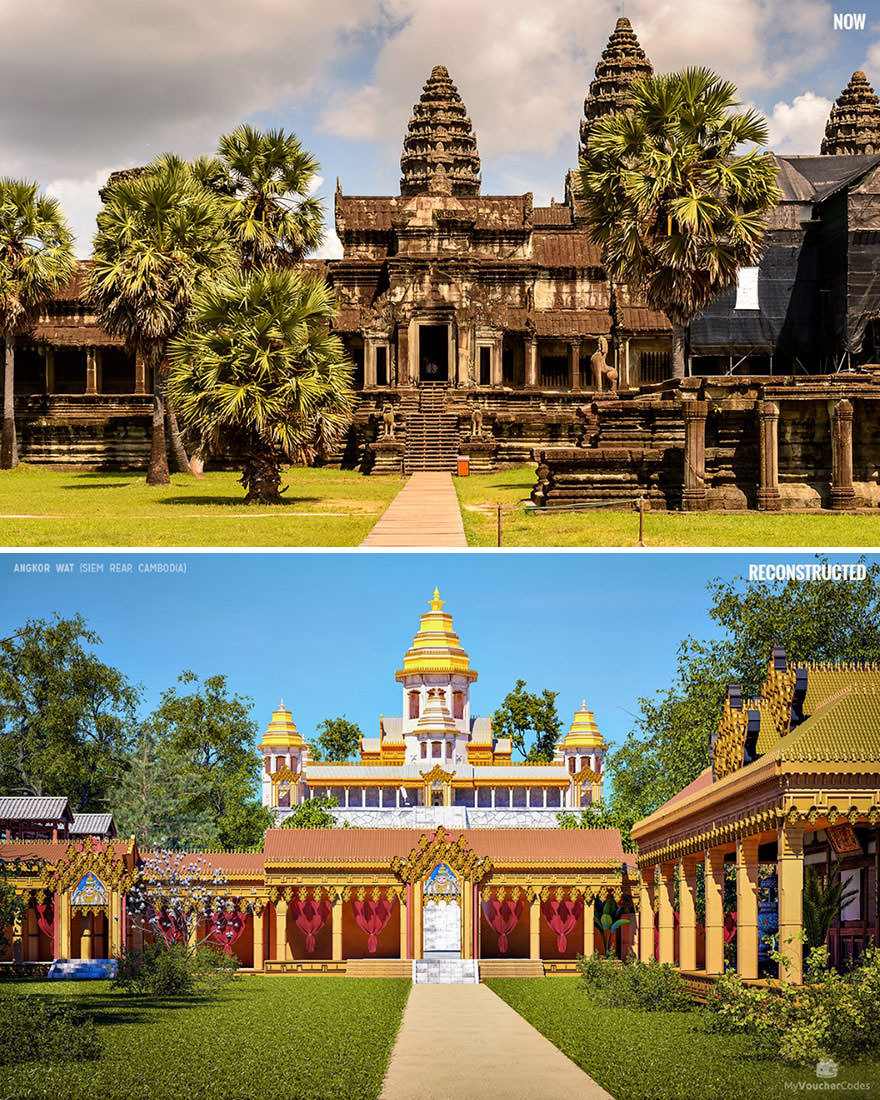 Angkor Wat is a temple complex in Cambodia and the largest religious monument in the world, and was originally constructed as a Hindu temple dedicated to the god Vishnu for the Khmer Empire, gradually transforming into a Buddhist temple towards the end of the 12th century It was built by the Khmer King Suryavarman II in the early 12th century in Yasodharapura, the capital of the Khmer Empire, as his state temple and eventual mausoleum. Breaking from the Shaiva tradition of previous kings, Angkor Wat was instead dedicated to Vishnu. It has become a symbol of Cambodia, appearing on its national flag, and it is the country’s prime attraction for visitors. 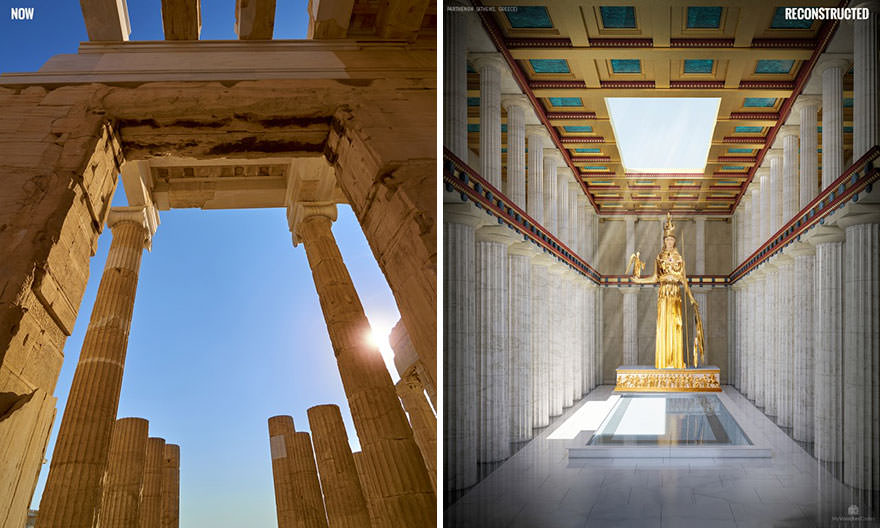 The Parthenon is a former temple, located on the Athenian Acropolis, Greece, dedicated to the goddess Athena, whom the people of Athens considered their patron. Construction first began in 447 BC when the Athenian Empire was at the peak of its power, and the structure was completed in 438 BC, although decoration of the building continued until 432 BC. It’s currently the most important surviving building of Classical Greece, generally considered the zenith of the Doric order. The monument is regarded as an enduring symbol of Ancient Greece, Athenian democracy and Western civilization, and one of the world’s greatest cultural monuments