Photo credit: ESO/Bohn et al.
European Southern Observatory’s Very Large Telescope (ESO’s VLT) has captured the very first image of a young, Sun-like star around two giant exoplanets. These two gas giants were observed in a planetary system around a star like our Sun that is located about 300 light-years away, called TYC 8998-760-1. They orbit at distances of 160 and about 320 times the Earth-Sun distance, meaning the exoplanets are much further away from their star than Jupiter or Saturn. Read more for two videos and additional information.

Additional observations of this system allows astronomers to test whether these planets formed at their current location distant from the star or migrated from elsewhere. ESO’s Extremely Large Telescope (ELT) will also delve into the interaction between two young planets in the same system. 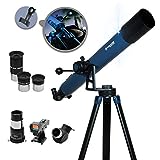 Even though astronomers have indirectly detected thousands of planets in our galaxy, only a tiny fraction of these exoplanets have been directly imaged…direct observations are important in the search for environments that can support life,” said co-author Matthew Kenworthy, Associate Professor at Leiden University.