Meet the real-life body snatchers, also known as jewel wasps. That’s right, it is known for its unusual reproductive behavior, which involves stinging a cockroach and using it as a host for its larvae. Continue reading for a video and more information.

It delivers an initial sting to a thoracic ganglion and injects venom to mildly and reversibly paralyze the front legs of its victim. Temporary loss of mobility in the roach facilitates the second venomous sting at a precise spot in the victims’s head ganglia (brain), in the section that controls the escape reflex. As a result of this sting, the roach will first groom extensively, and then become sluggish and fail to show normal escape responses. The wasp proceeds to chew off half of each of the roach’s antennae. Researchers believe that the wasp chews off the antenna to replenish fluids or possibly to regulate the amount of venom because too much could kill and too little would let the victim recover before the larva has grown. 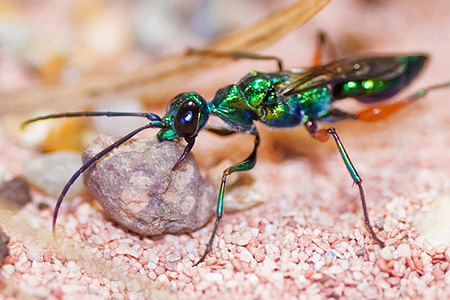 The wasp, which is too small to carry the roach, then leads the victim to the wasp’s burrow, by pulling one of the roach’s antennae in a manner similar to a leash. Once they reach the burrow, the wasp lays a white egg, about 2 mm long, on the roach’s abdomen. It then exits and proceeds to fill in the burrow entrance with pebbles, more to keep other predators out than to keep the roach in. 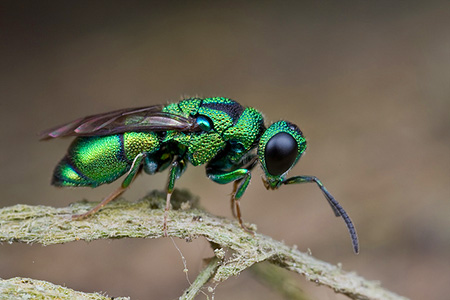 With its escape reflex disabled, the stung roach will simply rest in the burrow as the wasp’s egg hatches after about three days. The hatched larva lives and feeds for 4-5 days on the roach, then chews its way into its abdomen and proceeds to live as an endoparasitoid. Over a period of eight days, the wasp larva consumes the roach’s internal organs in an order which maximizes the likelihood that the roach will stay alive, at least until the larva enters the pupal stage and forms a cocoon inside the roach’s body. Eventually the fully grown wasp emerges from the roach’s body to begin its adult life. Development is faster in the warm season.