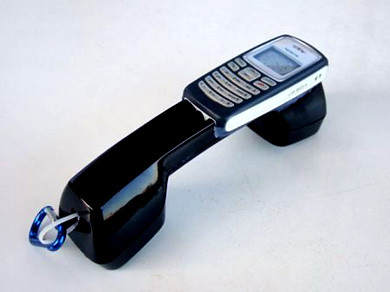 Daisung managed stuff the internals of a Nokia cell phone into an old telephone handset. For more information, check out a similar project here.

…every time I’ve used it, I got great reactions out of people who were extremely curious. The handset works just like a regular phone by the way! 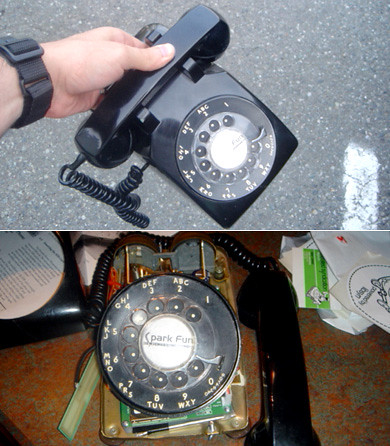 Yes, this is actually a fully functional GSM cell phone stuffed into an old rotary phone. It makes an interesting conversation piece to say the least.

“All you have to do is open the phone, insert your SIM card, and turn the unit on. The unit will utilize your phone number and account minutes. Phone can dial out using the rotary and will ring with the original metal bells with an incoming call”

“04gribblej” created a custom script for his Sony Ericsson phone that allows him to control a LEGO Mindstorms NXT robot via Bluetooth.

Pyrofer‘s nifty “Nokia 6230i Bluetooth Mouse” functions as both a computer input device and cell phone.

After giving up on the idea of a proper mouse HID I used the bluetooth to just link the phone as normal and send the data over the Nokia driver to a special driver on the PC again, this isnt as convenient as the original plan as it needs software on the PC as well as the phone

Sam Garfield managed to cram a Nokia 3200 phone into a standard NES controller after countless hours of hacking. Even though this isn’t the prettiest mod, everything is fully functional — including the speaker and microphone.

The select and start buttons were easy, and I simply cut them into the shape I needed with a pair of scissors. The buttons can the be glued or taped into place. Just make sure they do not intrude into the inside space of the controller