With all the iPhones and Android-powered handsets on the markets today, sometimes we can forget that there are other fascinating devices on the horizon, with some already available. In this feature, we round up five of the weirdest examples for your viewing enjoyment. Continue reading to see them all.

Design researcher Fabian Hemmert has created an interesting shape-shifting cell phone prototype that can shift its center of gravity. A demonstration video was shown at TEDxBerlin in 2009. The possibilities are intriguing, like a status bar that could get physically hefty as it gets weighed down with icons, but we’re not sucking down all of Hemmert’s Kool-Aid.

Made by Sonim and Land Rover, the S1 cell phone strives to be the most rugged handset ever, at least when you accidentally place it in a 300-degree oven, mud or beer. As for the specs, it has 1500 hours of battery and a 2-megapixel camera. And, most notably, it has an “extra loud” ringtone so you can hear it under elephants.

John’s Phone is touted as the world’s simplest cell phone, as it “can’t send messages, take pictures, or play music — it can only make or receive calls and comes with a physical address book and its stylus is an actual pen.” Fortunately, it does one thing very well, and that is making calls, no matter your location. 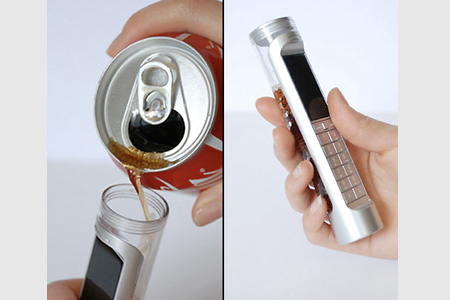 Yes, this mobile phone is powered by Coca Cola. Basically, “the bio battery the phone generates electricity from the carbohydrates (the sugar) in the Coke and uses enzymes as the catalyst.” Best of all, it works with pretty much any sugary soda. One caveat: things can get a bit messy if you happen to accidentally pour from a bad angle.

Fujitsu unveiled a futuristic dual-touchscreen cell phone concept at CEATEC 2010, featuring “a 3.4-inch capacitive touchscreen on top and a 3.5-inch version on the bottom, with both displays having 480 x 960 resolution.” One screen can be rotated by 90 degrees, and both screens switch between landscape and portrait modes automatically. What’s cool is that you can actually separate contents on both screens, for example using Twitter on top and checking emails on the bottom.

Why Gordon Freeman Should Never Talk