A fully-functional Apple I Motherboard from 1976 recently sold for $375,000 at a Sotheby’s auction. Also included in the package “was the Apple I Cassette Interface with manual, the computer’s Operation Manual with eight circuit diagrams and a Preliminary Apple BASIC Users Manual with warranty information.” According to the auction catalog, the computer was dismissed by everyone but Paul Terrell, the owner of a chain of stores called Byte Shop. Terrell ordered 50 computers for $500 apiece.” Continue reading for another picture, a bonus video, and more information. 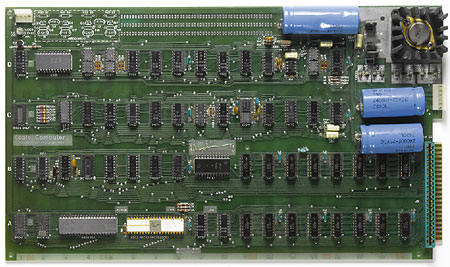 Sotheby’s said there was a battle between two parties for the item which also included the original manuals. A set of bids were executed by the auctioneer on behalf of an absentee collector, but a telephone bidder proved more persistent and eventually clinched the sale.