While fans of The Mandalorian are awaiting the second season, Hasbro wants to whet your appetite for merchandise with a new animatronic Baby Yoda, which made its debut today on Good Morning America. If you want to see it in person, head on over to the New York Toy Fair this weekend at the Jacob K. Javits Center. Read more for two videos and additional information.

You’ll have to shell out $60 for the toy when it hits shelves, but this figure does more than just move around. It features over 25 sound and motion combinations, which means its head, eyes, and ears move in response to the top of his head being touched.

You can pretend to harness the power of the Force as he closes his eyes, raises his arm, and sighs as if exerting a great amount of energy. Lay him down and he will close his eyes and take a ‘Force nap,'” said Tony Morrison for Good Morning America. 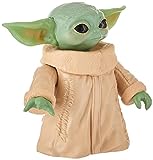