The Lockheed SR-71 “Blackbird” was truly ahead of its time, as we’ve yet to see a successor. This long-range, Mach 3+ strategic reconnaissance aircraft, operated by the United States Air Force, was developed as a black project from the Lockheed A-12 reconnaissance aircraft in the 1960s by Lockheed and its Skunk Works division. If a surface-to-air missile launch was detected, the standard evasive action was simply to accelerate and out-maneuver the missile. A total of 32 aircraft were built; 12 were lost in accidents with none lost to enemy action. Continue reading for more interesting things you may not know about the “Blackbird”.

5. Has a Continuous Supersonic Afterburner 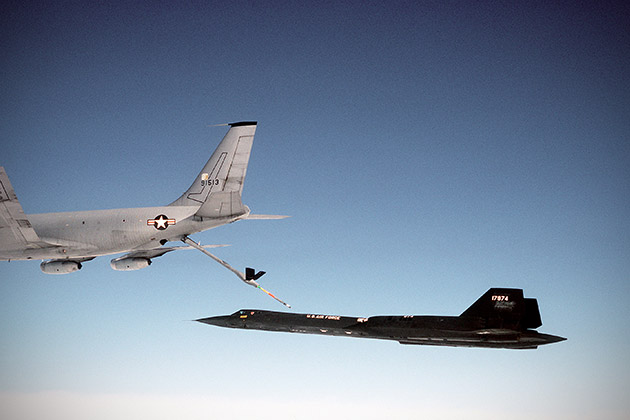 The SR-71’s diamond pattern engine exhaust is due to the extra thrust provided by the supersonic afterburner, which creates successive shock waves that show up as diamonds. The SR-71’s afterburners are continuously working except when refueling.

4. External Skin is Made from Titanium Alloy 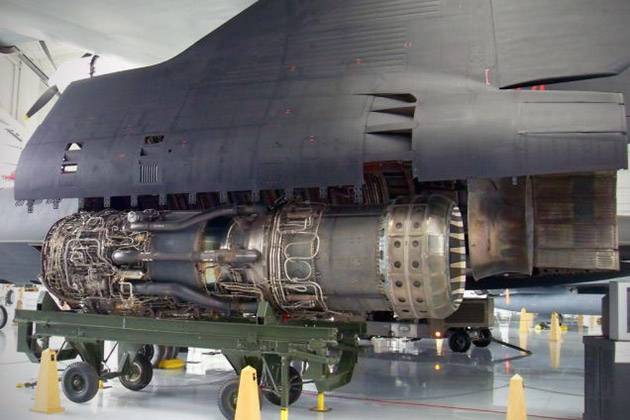 Thanks to a titanium alloy skin, the Blackbird can withstand temperatures that exceed 316° C (600° F). Its nitrogen-filled tires are made from a mixture of aluminum and latex to prevent them from melting – tire pressure is normally 415 psi, compared to the 32-35 psi in automobile tires. 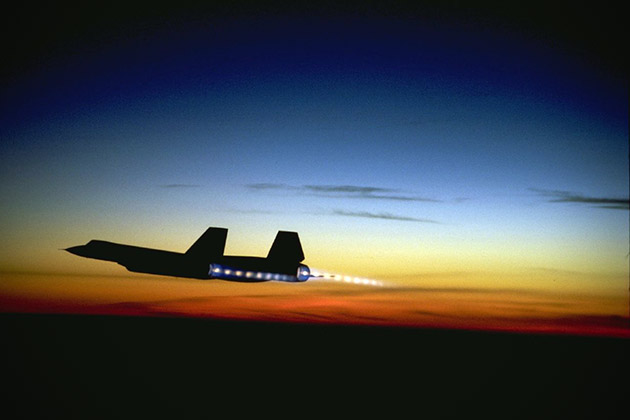 Flying at 80,000 ft (24,000 m) meant that crews could not use standard masks, which could not provide enough oxygen above 43,000 ft (13,000 m). Specialized protective pressurized suits were produced by the David Clark Company for the A-12, YF-12, M-21 and SR-71. Furthermore, an emergency ejection at Mach 3.2 would subject crews to temperatures of about 450 °F (230 °C); thus, during a high altitude ejection scenario, an on-board oxygen supply would keep the suit pressurized during the descent.

The air inlets allowed the SR-71 to cruise at over Mach 3.2 while keeping airflow into the engines at the initial subsonic speeds. Mach 3.2 was the design point for the aircraft, its most efficient speed. At the front of each inlet, a pointed, movable cone called a “spike” (Inlet cone) was locked in its full forward position on the ground and during subsonic flight.

1. Took Off with Only Partial Fuel Load

On a typical SR-71 mission the plane took off with only a partial fuel load to reduce stress on the brakes and tires during takeoff and also ensure the plane could still successfully take off should one engine fail. As a result planes were typically refueled immediately after takeoff. The SR-71 also required in-flight refueling to replenish fuel during long duration missions. Supersonic flights generally lasted no more than 90 minutes before the pilot had to find a tanker.

Lenovo Tab 2 A10 Tablet Has 64-Bit Quad-Core Processor, Can Be Picked Up for Under $180 Shipped