British inventor Colin Furze is back at it again, and this time, it’s a bizarre custom bicycle that will keep you far away from others while you’re out getting some exercise during this pandemic. Called the “Highcycle,” it’s basically a regular bike that has been fitted with an elongated frame that places the seat 6.5-feet off the ground, or the recommended distance to keep away from others. Read more for a video and additional information.

One thing you may not know about Colin is that he actually became a plumber after leaving school at 16, which allowed him to focus working on tools, gadgets and engineering. Shortly after his father died, he discovered the YouTube on which he shared his inventions beginning with his wall of death ramp way back in 2007. Since then, Furze has even appeared as one of the experts on Gadget Geeks, the short lived Sky1 series, in which the trio of experts would consult a member of the British public to test an invention idea in the workplace, along with Tom Scott and Charles Yarnold. 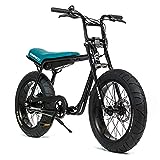