Amazon CEO Jeff Bezos officially announced today that he and his brother Mark will be joining the winner of the Blue Origin auction on New Shepard’s first human flight on July 20th. This fully reusable, vertical takeoff, vertical landing (VTVL) space vehicle has two main parts: a pressurized crew capsule and a propulsion module. This spacecraft is controlled entirely by on-board computers, without requiring a ground control crew or human pilots. Read more for a video and additional information.

The Crew Capsule is fully pressurized and can transport six people, while supporting a “full-envelope” launch escape system capable of separating the capsule from the booster rocket anywhere during the ascent. The interior measures 15 cubic meters (530 cubic feet), and once separation occurs, two or three parachutes deploy. Ahead of any landing, the retro rockets automatically fire. 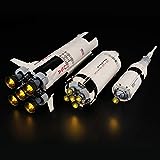 Ever since I was five years old, I’ve dreamed of traveling to space. On July 20th, I will take that journey with my brother. The greatest adventure, with my best friend,” said Jeff Bezos.