Photo credit: Peta Pixel
During World War 2 (1939-1945), photographers used the massive K-17 Army Air Force aerial cameras to capture images from above. They came equipped with a 6″ focal length Metrogon lens and was considered the standard for mapping cameras of its day as well as long after the war. The 20th Air Force used it for some reconnaissance photography with the K-17 and 12″ lens late in the war. However, they were most commonly used for mapping with the 6″ Metrogon lens. Read more for another picture and additional information. 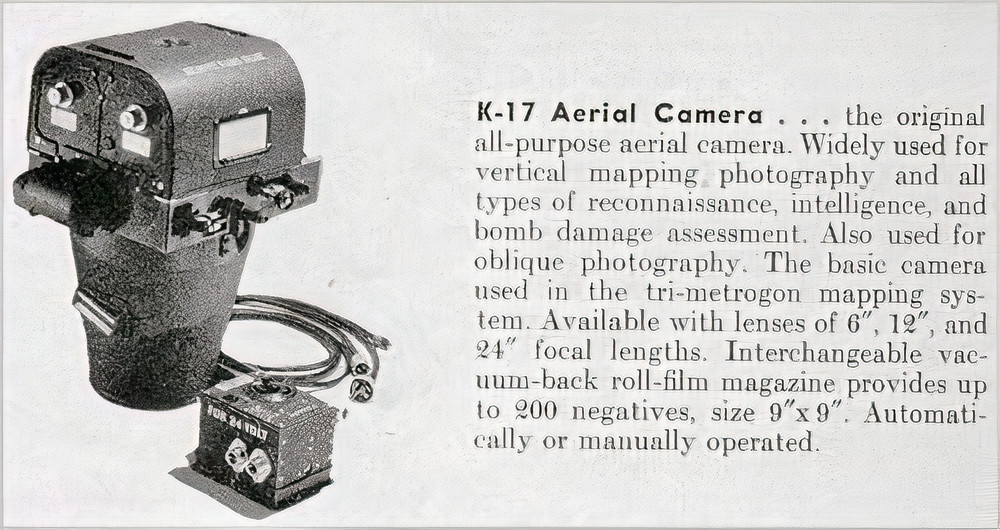 It was normally operated from a 24 VDC electrical source, but could also be manually controlled with a hand crank and shutter lever. Each camera was fitted with a connector for an intervalometer that fired the shutter at an interval set by the aerial photographer.

While these cameras were normally clamped into mounts, a pair of handles and a viewfinder could be fitted to K-17s and K-18s for hand-held operation. What “hand-held” meant is subject to interpretation, as these cameras were not lightweights. With a 200 foot roll of film, the A-5 film magazine used with the K-17 weighed 30 pounds. A complete K-17 with 12″ lens cone and a full magazine weighed about 55 pounds. With a 24″ lens instead of the 12″, the weight climbed to near 75 pounds,” said one photographer.