In real life, the Bell Boeing V-22 Osprey is basically a multi-mission, tiltrotor military aircraft with both vertical takeoff / landing (VTOL) and short takeoff / landing (STOL) capabilities. It’s essentially designed to combine the functionality of a conventional helicopter with the long-range, high-speed cruise performance of a turboprop aircraft. LEGO was planning on releasing a Technic (42113) set based on this aircraft next month, but as of today, it’s been indefinitely delayed. Read more for a hands-on review and additional information.

The German Peace Society is protesting this Osprey set because it’s based on a military vehicle, but this LEGO version is of a search and rescue variant, without weapons. This week, protestors plan on staging events outside three LEGO Stores in Germany, including their flagship outlet in Berlin. 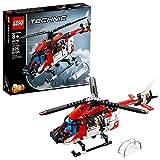 The LEGO Technic Bell Boeing Osprey V-22 was designed to highlight the important role the aircraft plays in search and rescue efforts. While our set depicts a rescue version of the plane, the aircraft is predominately used by the military. We have a long-standing policy not to create sets which feature military vehicles and in this case we have not adhered to our own internal guidelines. As a result, we are currently reviewing our plans to launch this product on August 1.

Lightweight Proteus Material is Non-Cuttable, Gets Attacked with an Angle Grinder