At first glance, you may think the aircraft above is a Transformers robot, but it’s actually the Bell Boeing V-22 Osprey, a tiltrotor military aircraft with both a vertical takeoff and landing (VTOL), and short takeoff and landing (STOL) capability. It combines the functionality of a conventional helicopter with the long-range, high-speed cruise performance of a turboprop aircraft. Continue reading for more interesting facts. 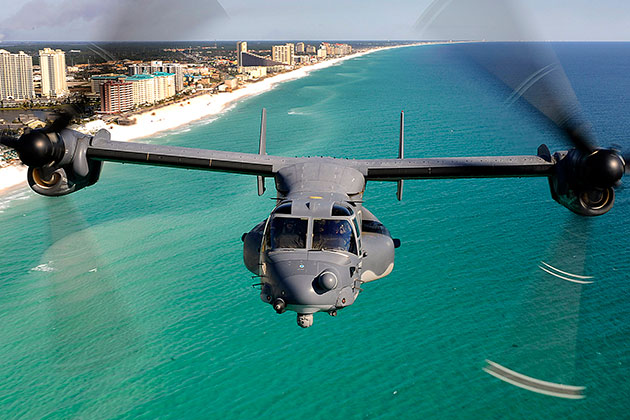 The Osprey is the world’s first production tiltrotor aircraft, with one three-bladed proprotor, turboprop engine, and transmission nacelle mounted on each wingtip. Once airborne, the nacelles rotate forward 90° in as little as 12 seconds for horizontal flight, converting the V-22 to a more fuel-efficient, higher speed turboprop aircraft. STOL rolling-takeoff and landing capability is achieved by having the nacelles tilted forward up to 45°.Other orientations are possible, such as the “80 Jump” takeoff which uses nacelles at 80° to quickly achieve high altitude and speed 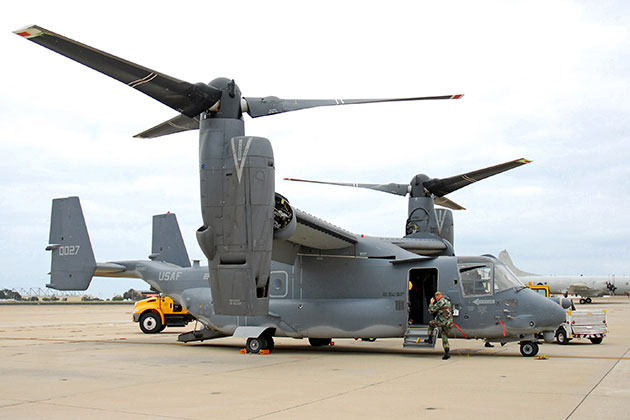 The V-22’s two Rolls-Royce AE 1107C engines are connected by drive shafts to a common central gearbox so that one engine can power both proprotors if an engine failure occurs. In the V-22 program, the Navy purchases engines separately from the aircraft themselves. The General Electric GE38 has been considered as a replacement, providing commonality with the CH-53K King Stallion.

The team of Bell Helicopter and Boeing Helicopters was awarded a development contract in 1983 for the tiltrotor aircraft. The Bell Boeing team jointly produce the aircraft. The V-22 first flew in 1989, and began flight testing and design alterations; the complexity and difficulties of being the first tiltrotor intended for military service in the world led to many years of development.

The Osprey can be armed with one .308-caliber NATO M240 machine gun or .50-caliber M2 machine gun on the loading ramp, that can be fired rearward when the ramp is lowered. A .50 in GAU-19 three-barrel Gatling gun mounted below the V-22’s nose was studied for future upgrade. BAE Systems developed a belly-mounted, remotely operated gun turret system for the V-22, named the Interim Defense Weapon System (IDWS). The IDWS is remotely operated by a gunner inside the aircraft, who acquires targets via a separate pod using color television and forward looking infrared imagery.

These Sea Slugs Look Just Like Fluffy Bunnies, and They’ve Become an Internet Hit in Japan