The Mayflash F300 Arcade Fight Stick has been touted as the best entry level model, and you can get one for $54 shipped, today only, originally $79.99. For those who like customization, you can easily swap in Sanwa Denshi buttons and joystick. It’s compatible with the PS3 / PS4, Xbox 360, Xbox One, PC, Nintendo Switch and Android platforms. Product page. Read more for a hands-on video review and additional information. 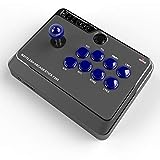