People who live near major airports see them daily, but did you know jet trails (contrails) can last up to 14-hours? NASA’s Terra satellite captured mind-blowing photos of the phenomenon recently. To be more specific, these images were “taken over two hours on May 26, [and] capture contrails that were likely caused by commercial aircraft flying west to North America from the UK and Europe.” Continue reading for another picture and more information. 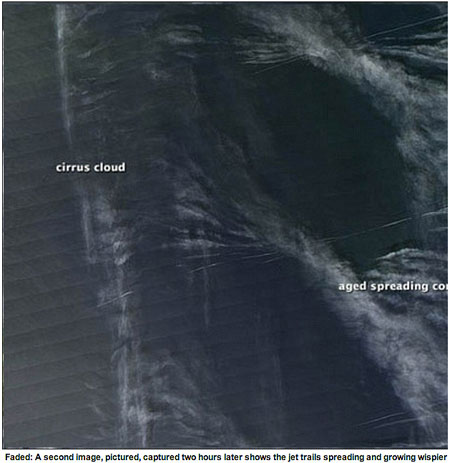 The airplane signatures with distinct edges are visible in the first, older image, but two hours later have grown wispier and spread outward as winds have blown them south and east. The temperature and humidity of the air affects how long contrails last – when the air is dry, they remain visible for mere seconds or minutes.

But when the air is humid, as was the case here, contrails can be long-lived and spread outward until they become difficult to distinguish from naturally-occurring cirrus clouds.