NASA’s Hubble Space Telescope has captured an eerie sight just in time for Halloween, and it’s a red giant star. Called CW Leonis, the orange-red cobweb-like figures you see are actually dusty clouds of sooty carbon engulfing the dying star. The carbon being shot back into space provides raw material for the formation of future stars and planets, including complex biological molecule, which consist of carbon atoms bonded with other common elements in the universe. Read more for a video and additional information.

CW Leonis is located 400 light-years from Earth and is its closest carbon star. This data allows astronomers to better understand the interplay between the star and its surrounding, turbulent envelope. Hubble has captured many detailed images of CW Leonis taken over the past 20-years, showing the expansion of threads of ejected material around the star. 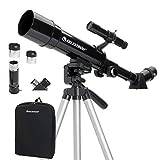 A star shines when the outward pressure from the fusion furnace at the core balances against the crush of gravity. When the star runs out of hydrogen fuel, the persistent pull of gravity causes the star to start collapsing. As the core shrinks, the shell of plasma surrounding the core becomes hot enough to begin fusing hydrogen, giving the star a second lease on life. It generates enough heat to dramatically expand the star’s outer layers and swell up into a bloated red giant,” said NASA.

This Looks Like a Wooden Drawer at First, But It’s Actually a Fully-Functional Desktop PC