The filters immediately began adding dumbbells, hats, helmets, sunglasses and even a wizards’ beard during the live broadcast. Fortunately (or unfortunately), his photographer warned him that the camera was doing something weird, but he shrugged it off initially and continued anyway. 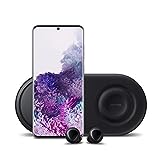 When you’re trying to do a serious Facebook Live about the weather and you accidentally tap the Mystery Mask filter. Poor Justin Hinton,” said a WLOS ABC 13 representive on Facebook.

Microsoft Surface Duo Will Let You Peek at Notifications, According to Leaked Video