Jonathon Ward is known for his Icon restomods, especially Toyota Land Cruiser FJs, and his Derelict series has been around for quite some time. His latest project transforms a 1949 Mercury coupe into an all-electric vehicle, this pairs a Tesla powertrain with an untouched-looking exterior, besides some suspension work. Beneath the shell, you’ll find a full Art Morrison custom frame, a Derelict badge and even one of Ward’s signature lizard sculptures. For those heading to the Geneva Motor Show next week, you’ll be able to see it in-person. Read more for an up-close look.

The original gas cap hides a cleverly placed Tesla supercharger connector, and behind the license plate is a CHAdeMO receptacle. On the inside, there’s plenty of period-appropriate upholstery, power windows that operate via the original manual window cranks, digital gauges by Andromeda and A/C vents that now perforate the dash. 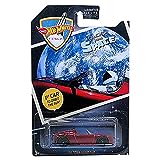 Under the hood, it comes equipped with battery controllers and a full 85-kWh set of Tesla batteries spread around the car with some placed underhood that slightly resemble a V8 engine. The electric motors produce 470 lb-ft of torque and the equivalent of about 400 horsepower. On a 90-minute recharge, you can expect between 150-200 miles of range.