Should you decide to purchase the full ready-to-go kit, it includes the Raspberry Pi 400 computer, an official USB mouse, USB-C power supply, a microSD card with Raspberry Pi OS pre-installed, a micro-HDMI to HDMI cable, and the official Raspberry Pi Beginner’s Guide. Simply plug this into a TV or monitor, and you’ll be ready to go. 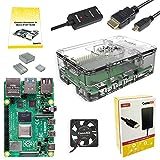 UK, US, and French Raspberry Pi 400 kits and computers are available to buy right now. Italian, German, and Spanish units are on their way to Raspberry Pi Approved Resellers, who should have them in stock in the next week. We expect that Approved Resellers in India, Australia, and New Zealand will have kits and computers in stock by the end of the year. We’re rapidly rolling out compliance certification for other territories too, so that Raspberry Pi 400 will be available around the world in the first few months of 2021,” said the foundation.

This is How a Pinball Machine Works in Ultra Slow Motion