Luxury auction house Christie’s is putting a real 67-million-year-old Tyrannosaurus Rex skeleton up for bid. This ultra rare specimen, called “STAN,” was discovered in 1987 somewhere around South Dakota by amateur paleontologist Stan Sacrison. It was unveiled to the public today at Christie’s Rockefeller Center in New York and offered as a highlight of Christie’s Evening Sale of 20th Century Art on October 6 with an estimate selling price of of $6-8 million. Read more for a video and additional information.

STAN stands 13 feet high and 40 feet long with the tail outstretched, complete with 188 original bones, making it one of the largest and most complete specimens known to exist. Its skull is also one of the most complete Tyrannosaurus Rex examples known to science, and could hold as many as 58 functioning teeth. 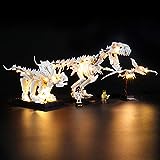 We are honored to be bringing STAN to auction and to have been entrusted with the stewardship of such and iconic and important T. rex. I’ll never forget the moment I came face to face with him for the first time, after his remount in Colorado – he looked even larger and more ferocious than I’d imagined, a specimen that only further establishes the T. rex’s position as the King of Dinosaurs,” said James Hyslop, Head of Department, Scientific Instruments, Globes & Natural History, Christie’s.