Kano’s Star Wars The Force Coding Kit puts a geeky twist on programming, and you can pick it up for $29.99 shipped, today only, originally $79.99. Simply open the box, remove the parts, follow the book, connect the board / button / bits, and you’ll be ready to play with the sensors to see how they work. Connect code blocks, see the JavaScript, learn about loops, logic, and variables. The more you train, the more powerful of a Jedi you’ll become. Product page. Read more for a hands-on video review and additional information. 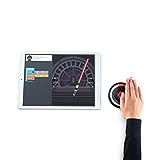 You can move your hand to swing lightsabers, levitate X-wings, pilot starships, make Force lightning, Jedi Mind Trick stormtroopers, and lots more. Or, you’ll be able to create your own Star Wars adventures with iconic characters, creatures, starships, sounds, and planets, making it simple for beginners as well as expansive for expert coders.