Artist Arturas Tamasauskas takes everyday things, like musical instruments, to create Steampunk sculptures. First up, we have the “Turbo Ostrich”, which was handcrafted from an old saxophone. “I use the most diverse materials for work starting from wares, antiquarians and ending with rubbish that is useless. It is a pleasure for me that I can help to transform an item that was thrown and is useless giving it the opportunity to exist in a new shape, in a new form as if I continued its existence in an already artistic expression,” said the artist. Continue reading for more pictures and information. 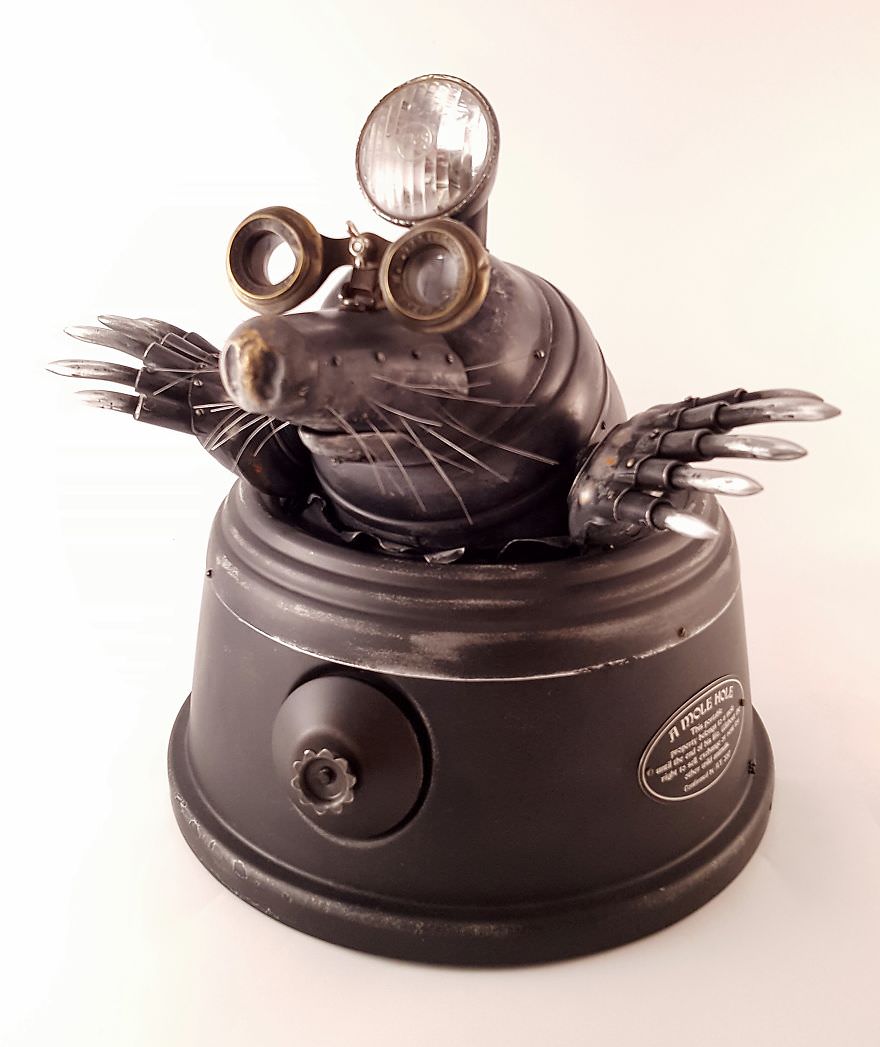 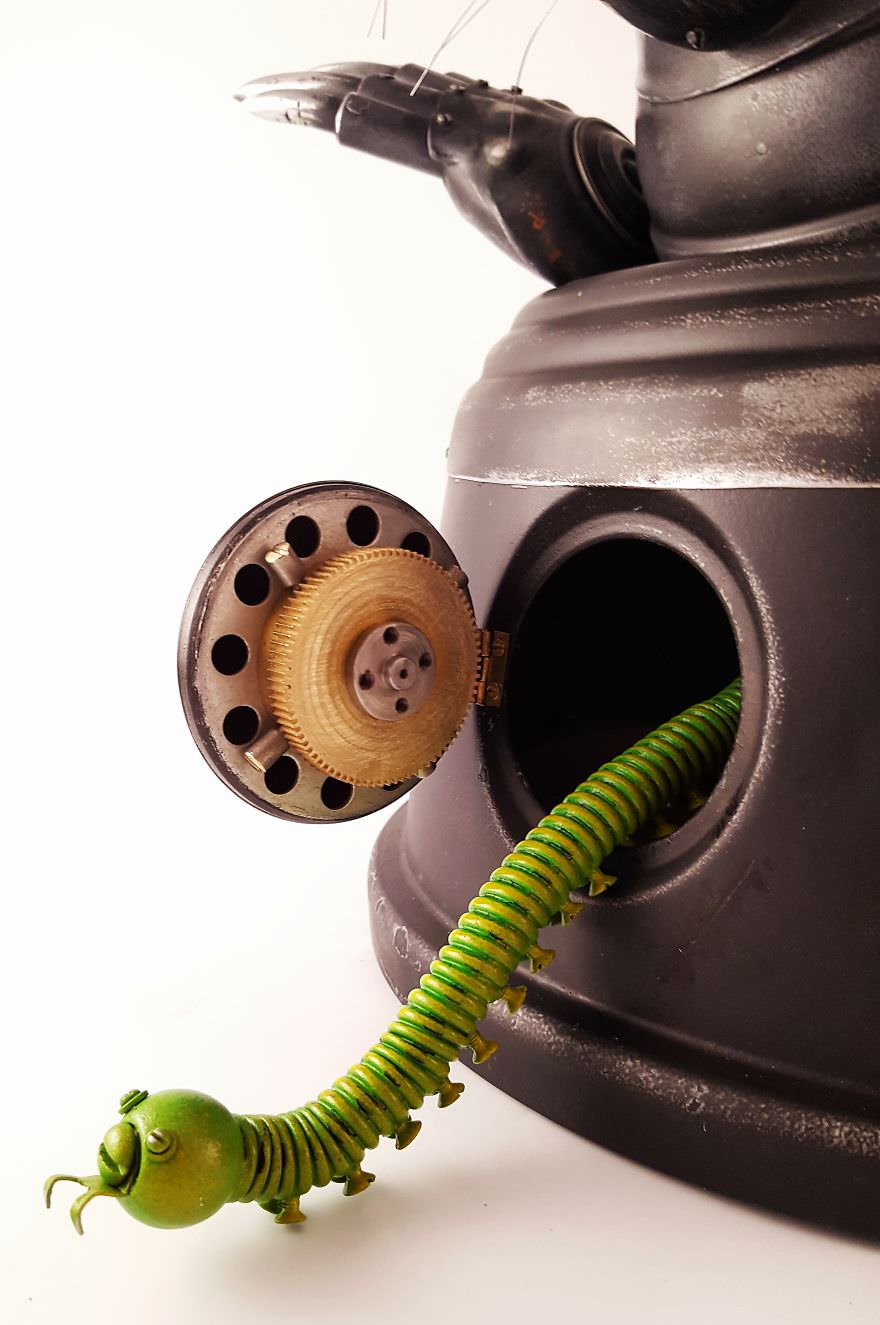 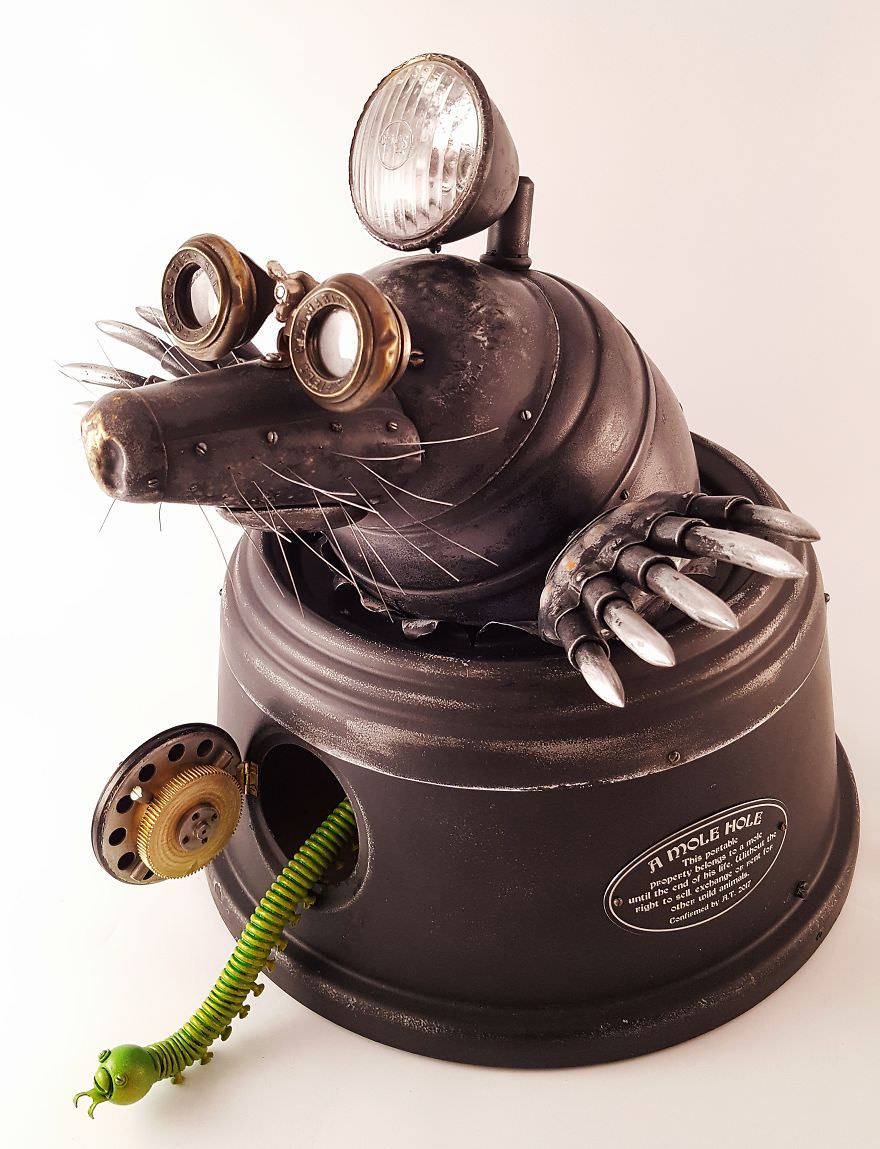 Once upon a time a mole lived and he had his own mole hole (a house). It was his portable property which could stand anywhere and no land tax had to be paid for this because it was a mole, spectacled and armed, with exclusive length nails which helped him to dig the longest tunnel with very little effort.

Of course, he didn’t know anything about the secret exit. A caterpillar was running out through it as soon as he started feeling danger. It always happened but as soon as it gets to know about it, that will end or maybe they’ll become friends.

That’s the story that was born in my head while I was turning over the corpse of vacuum cleaner in my hands. 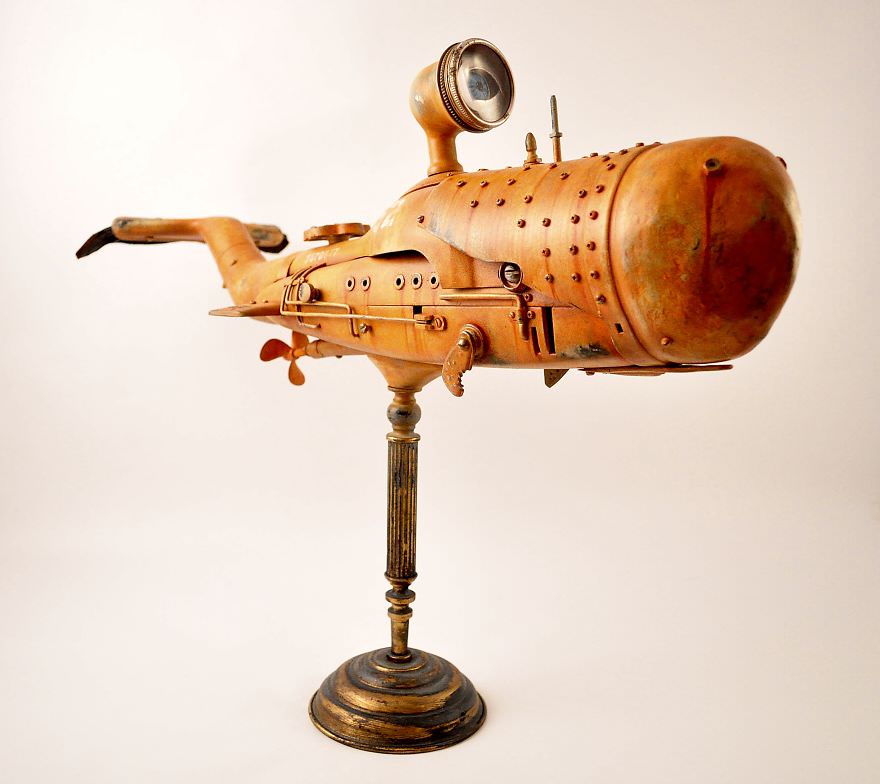 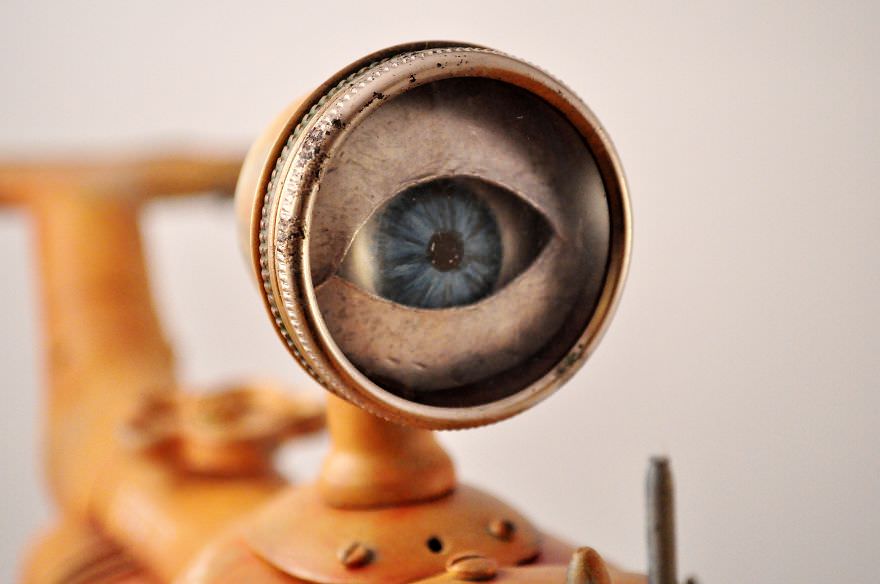 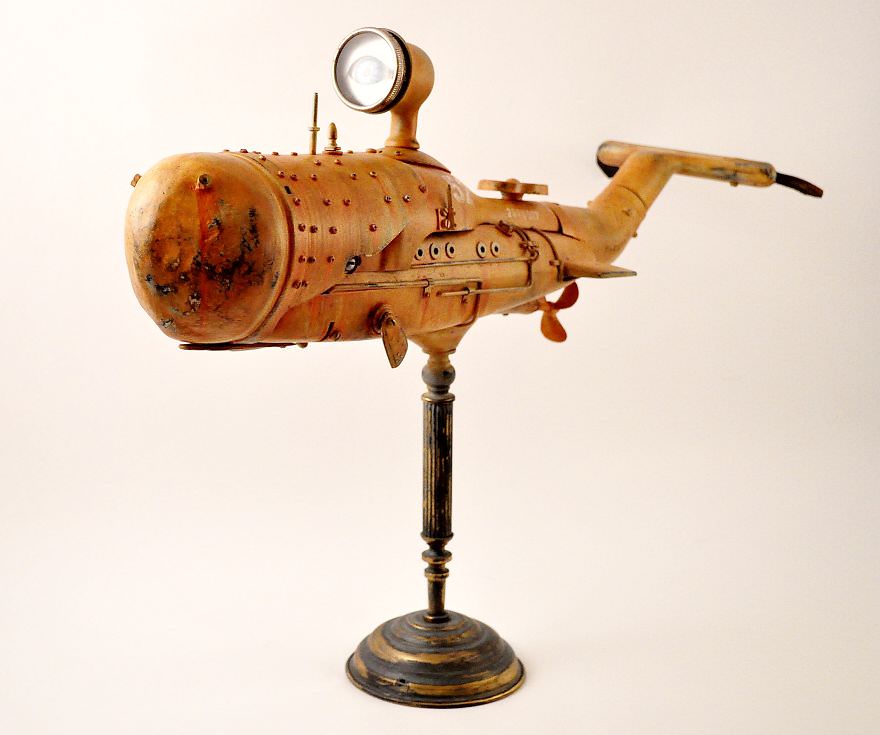 This piece of art was created quite accidentally. I was assembling the sculpture at my studio and while looking for a proper part, I saw an old sewing machine corpse cover dropped a long time ago.

I’ve found another one identical cover, mixed up with each other in my mind and I had already imagined the result of the future work.

The idea of combining the submarine and the sea resident sperm whale was in my mind because they looked somehow similar to me. I had to use my imagination to make this attractive bathyscape and sperm whale hybrid. 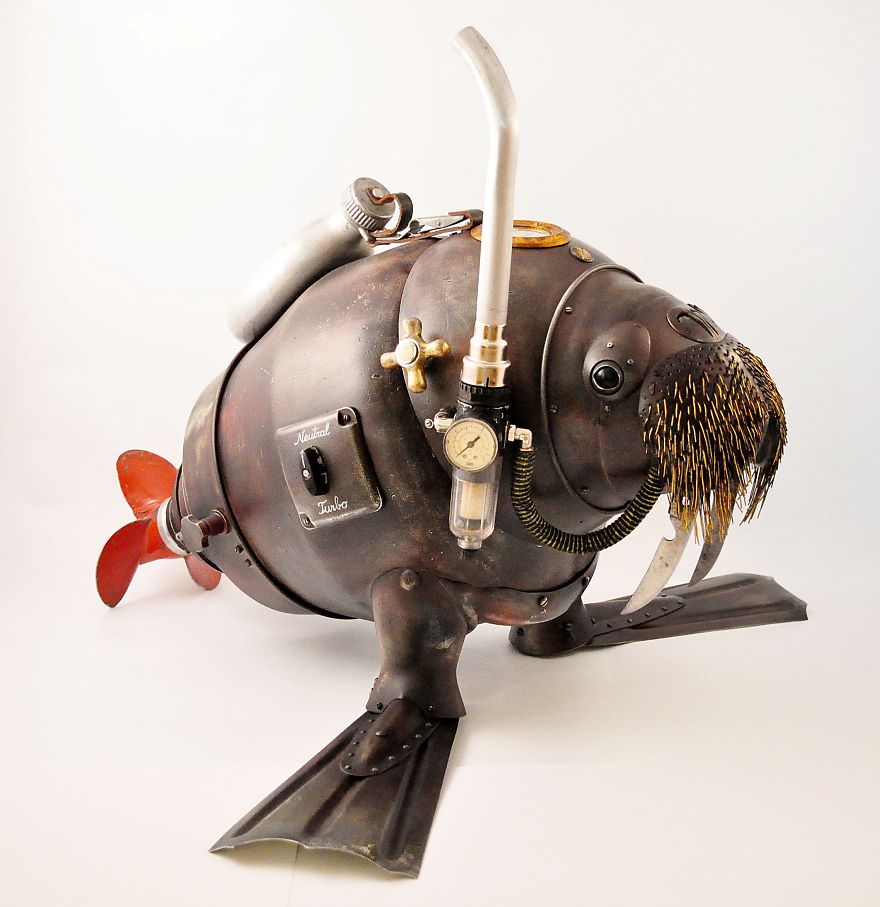 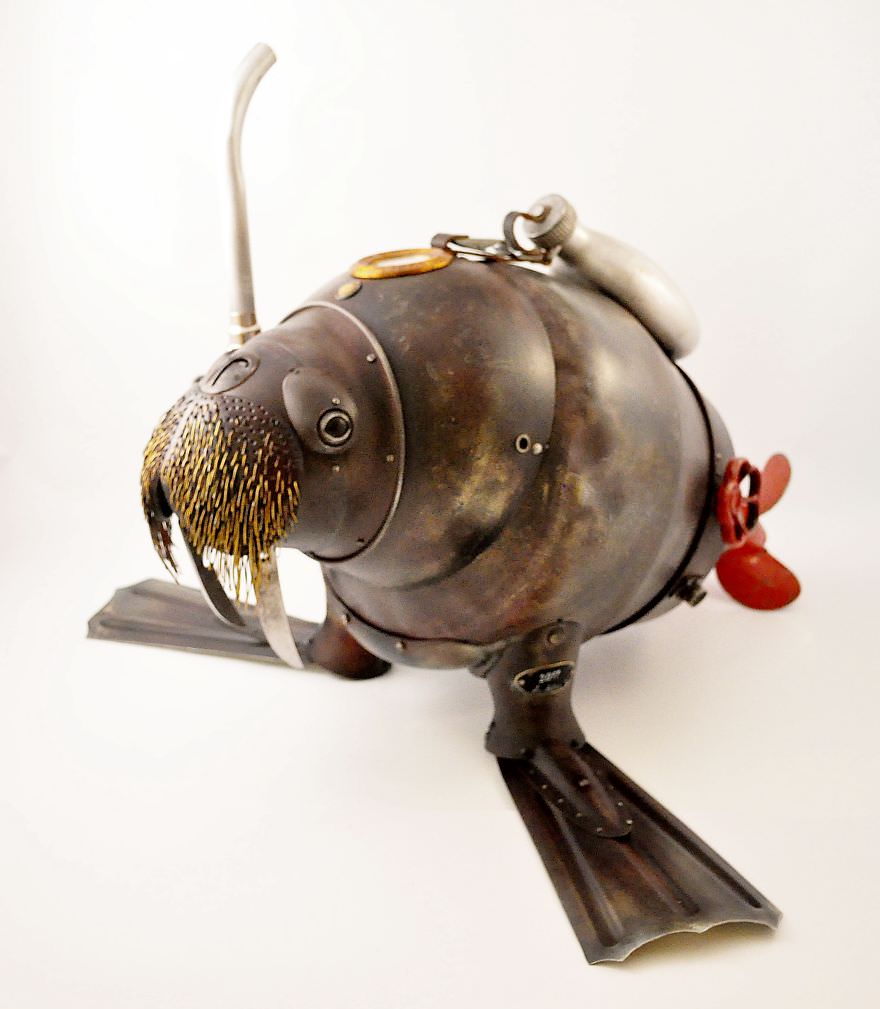 The emergence of this sculpture was initiated by the old scissors which was received from the aunt to chop the fins. Their curved shape fated this scissors to become hawthorn. Later everything self-assured.

Again everything turned into the feeling as if I’m creating the animation movie character. That’s the way it goes by itself, as I’m trying to represent each animal with unusual attributes and shapes. Then they become interesting, even funny, but it’s exactly my wish and my purpose – to cause curiosity in people and reward a smile. I think that a good dose of humour haven’t hurt anyone until now.

Some time ago I had created a walrus but it was much smaller. It completely surpassed my expectations. That’s a real diving champion.