Photo credit: IEEE Robotics and Automation Letters
Université de Sherbrooke researchers collaborated with a group at Exonetik Inc. to develop a wearable supernumerary robotic arm that provides superhuman functionality for common human tasks, and could possibly even be Doctor Octopus-inspired. Simply put, a supernumerary robotic device is something that adds functionality to an existing system, and for this prototype, they added a third arm, complete with a three-fingered hand, to a human subject. Read more for a video and additional information.

The bottom section is strapped to the waist and hips of the user to anchor it in place, while the robot arm extends to perform functions as the user either watches or carries out his or her own activities. In other words, it can be remote-controlled by a miniaturized version of the arm operated by a second person standing nearby. Future upgrades call for semi-autonomous control without requiring a second operator. 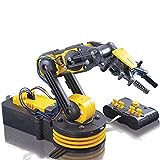