Photo credit: James Fridman via Bored Panda
Photoshop guru James Fridman continues to accept photo retouching requests through social media, and the results are as literal as ever. For example, the two brothers above requested to have both wearing the same shirt, and James ended up wrapping them both in one giant garment instead. Other examples include: relocating people, giving someone wings, making a person shorter, and more. Continue reading to see seven of his latest requests.

Peter Jackson may be known for bringing JRR Tolkien’s Lord of the Rings to the big screen, but he decided to leave fantasy behind for his latest project, titled “They Shall Not Grow Old”. It’s a World War I documentary, complete with color and digitally enhanced sound. The filmmaker sourced archival footage from The Imperial War Museum, used the original audio from BBC and the voices of war veterans. “Many hours of dramatic footage were filmed on the battlefields, capturing the realities of the conflict in remarkable and unprecedented detail. This footage provided the public at home with astonishing access to the frontline: The Battle of the Somme, a documentary film produced with the cooperation of the War Office, was seen by an estimated 20 million Britons in its first six weeks of release,” said The Imperial War Museum. Read more for another trailer and additional information.

Adobe’s Photoshop CC October 2018 update adds several new functions, including a new Content-Aware Fill workspace that lets you change the selected source and adapt content based on rotation, scale, and mirroring. Previously, the software was limited to a simple select and delete functionality. In other words, the Content-Aware fill tool can now replace missing sections of a photo with something that doesn’t exist perfectly in the original itself, thanks to artificial intelligence. Read more for another in-depth video along with additional information.

Yes, just about everyone who has been on the internet the past year has seen the “Distracted Boyfriend” meme, but visual designer Hayati from Cyprus decided to put a modern twist on it with characters from famous artworks. To be more specific, the boyfriend has been replaced by none other than Vincent van Gogh, and the girlfriend with Girl with a Pearl Earring. “I’m inspired by people I see in everyday life. The fun begins when I mix them together with the best classics,” said Hayati. Continue reading for more pictures. 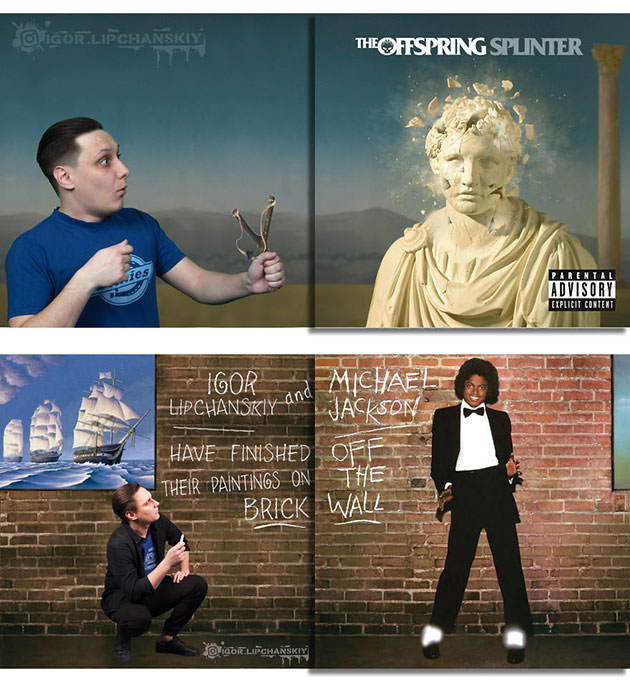 Have you ever wondered what lies outside the album cover frames? If so, Photoshop guru Igor Lipchanskiy is an expert at showing you just that, starting the The Offspring’s “Splinter” (2003) and Michael Jackson’s “Off the Wall” (1979) covers. “Half a year ago I published a post about how I place myself into near-cult covers of musical albums. Since then, I have created new images and I want to share them with you,” said Igor. Continue reading for more.

Bulgarian artist Angel Ganev doesn’t rely on Photoshop,or similar software, to create these awesome glowing illustrations, but rather pencils as well as lighting techniques. “Each picture is coupled with a unique mood, wherein the glow becomes a feeling of a warm autumn evening with a cup of tea in one portrait, and a cool metallic touch of magic in another,” said “Hidreley” of Bored Panda. Continue reading for more.

Today at the Adobe MAX 2018 conference, Adobe introduced MovingStills for the Creative Cloud, a feature that lets you essentially transform still photographs into cinematic sequences. It uses artificial intelligence to create a parallax based on the photo’s data, which is turned into a video shot with a moving camera. Continue reading for the full tech demo video and more information.

Adobe announced Photoshop CC for the iPad at its annual Adobe MAX conference, offering a full Photoshop experience for your mobile device. “We’re completely rethinking the user experience for a modern touch device. You’ll find it familiar, but also adapted in smart ways for the device. We’ve designed Photoshop on iPad with natural touch gestures in mind to speed up workflow. No exporting, importing, converting to different formats, or fixing whatever didn’t properly convert. It all just seamlessly works” said Adobe. Continue reading for a hands-on video preview and more information.

Digital artist and 3D illustrator Miguel Vasquez has made a name for himself on Instagram, but not in the way you may think. He specializes in creating realistic versions of popular cartoon characters, like Homer Simpson, and as you can see, the results aren’t very pretty. Others include: SpongeBob, Luigi, Patrick Star, and more. Continue reading to see more of his popular works.

Kimiko Nishimoto, a 90-year-old grandmother from Japan, has not been a photographer all her life, but recently picked up that hobby, along with Photoshop, and these photo manipulations are the result. In addition to becoming a social media star, this past December, she was honored in Tokyo with a gallery exhibiting her most popular works. Continue reading for more pictures and information.