Ever wonder how “The City of Lights” looked over 100-years ago? Well, this photo archive shows just that, starting with the iconic Eiffel Tower. “Next to the Eiffel Tower, the “Globe Celeste” was one of the main attractions in Paris. It was a monumental heavenly globe of 45 meters in diameter, in which visitors could sit in a chair, while panoramas of the solar system were passed over. The ball was carried by 4 pillars, between which stairs and elevators allowed the visitors the ascent. In the ‘Marerama,’ the building with the four corner towers to the left, visitors were simulated to be on the deck of a ship with a panorama of the large Mediterranean ports. The exhibition pavilions located directly on the shore on the left were dedicated to navigation, trade and navigation,” according to photographer Nicolai Wolpert. Continue reading for more photos and information. 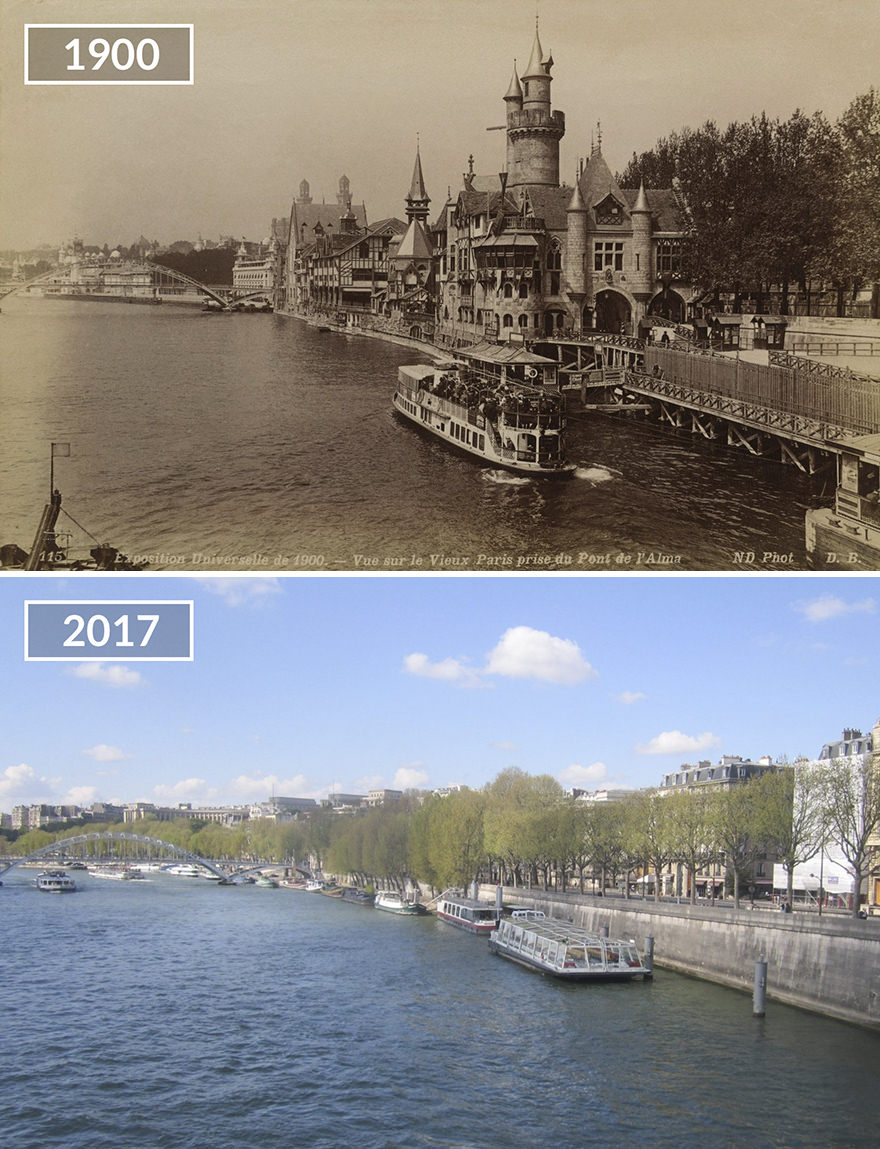 The “Vieux Paris” was a selection of temporary buildings erected solely for the World Fair and designed to give the visitor an idea of what the city would have looked like in the Middle Ages. The buildings to be seen in the picture were part of the Renaissance quarter. Very striking is the tall building with the two towers (“Le Grand Chatelet”), whose style dates back to the time of Louis XII. (1462-1515). As only survivor of the world exhibition of 1900 remains the pedestrian bridge “Passerelle Debilly”. 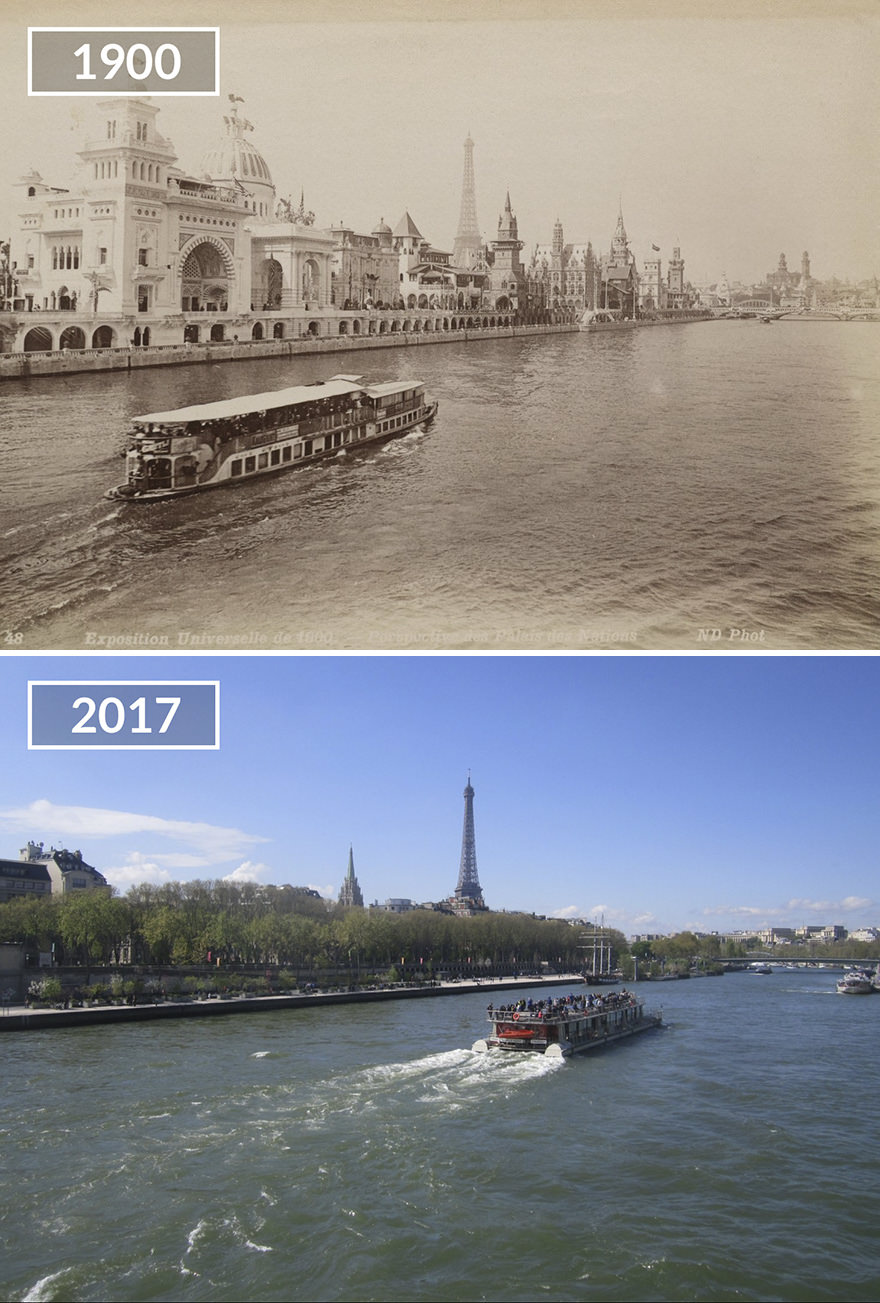 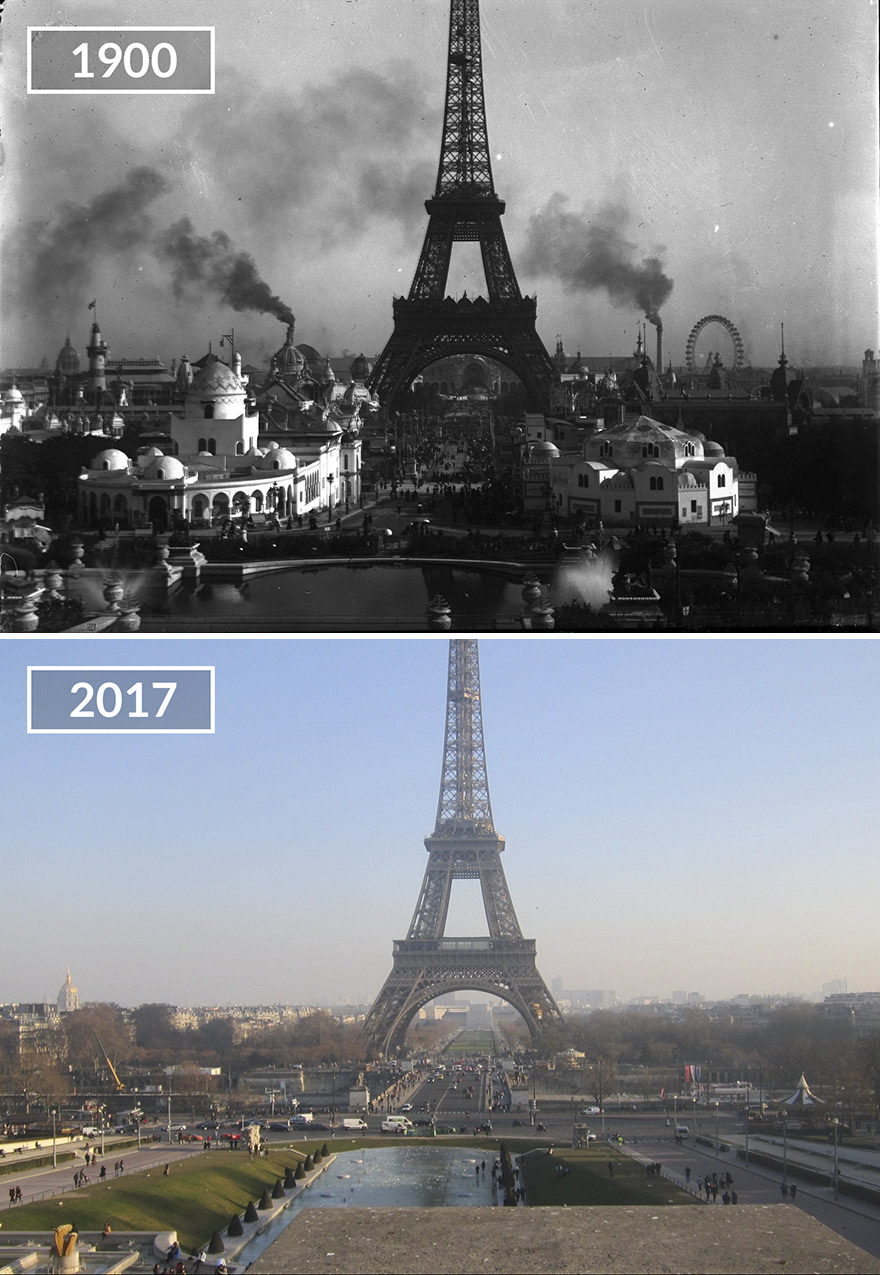 In the foreground one can see the water basin of the Jardins du Trocadero, in the center left and right the houses of Algeria, which were part of the colonial exhibition. Behind is the Pont du Iena, which connects the Jardins du Trocadero with the Champ de Mars. Behind one can see, from left to right, the dome of the Invalides, the Eiffel Tower, the Palais de l’Electricite, with a monumental water tower, flanked by the two chimneys of the engine room, and finally the Ferris wheel (“Grande roue”), to the right. The world fair was attended by over 48 million people. 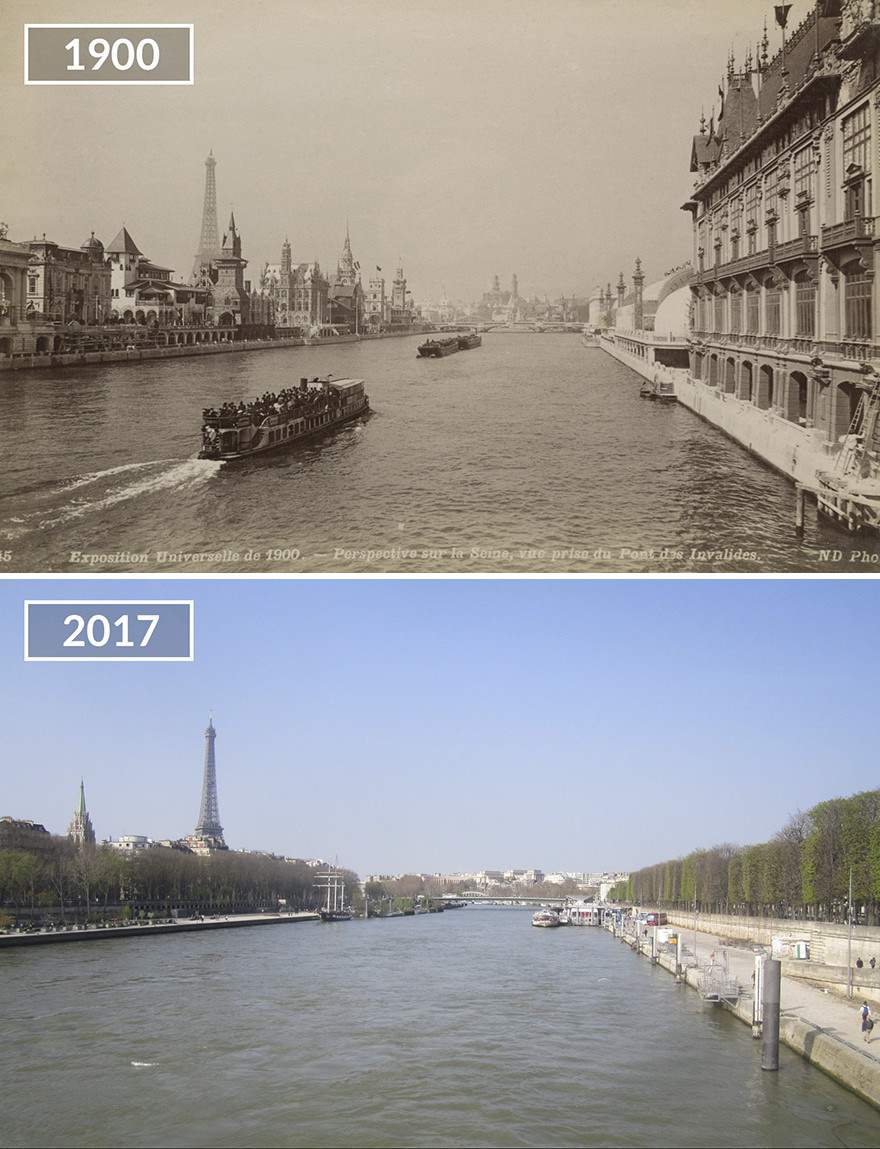 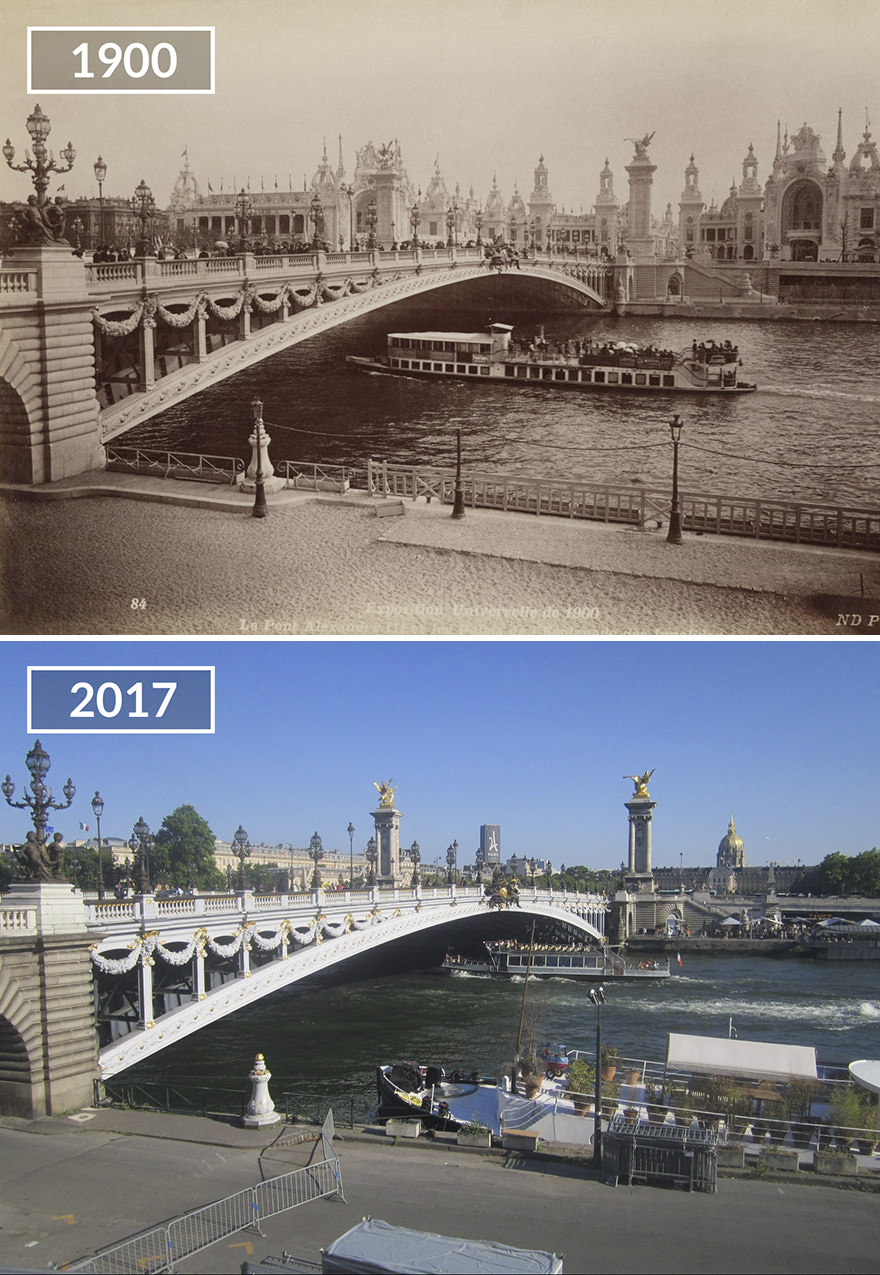 Pont Alexandre III was named after the Czar of Russia and symbolized the Franco-Russian friendship. With a width of 40m, it was the largest bridge in Paris during the 19th century. Impressive are not only the splendid ornaments, but also the high technical performance: it spans the Seine in a single arch of 107 m, without forming a curve which would hinder the perspective of the Invalides. Behind it lies the Esplanade des Invalides, the forecourt to the H�tel des Invalides. At the occasion of the world exhibition, it was lined with impressive exhibition palaces dedicated to the manufactory, the arts and the industry. 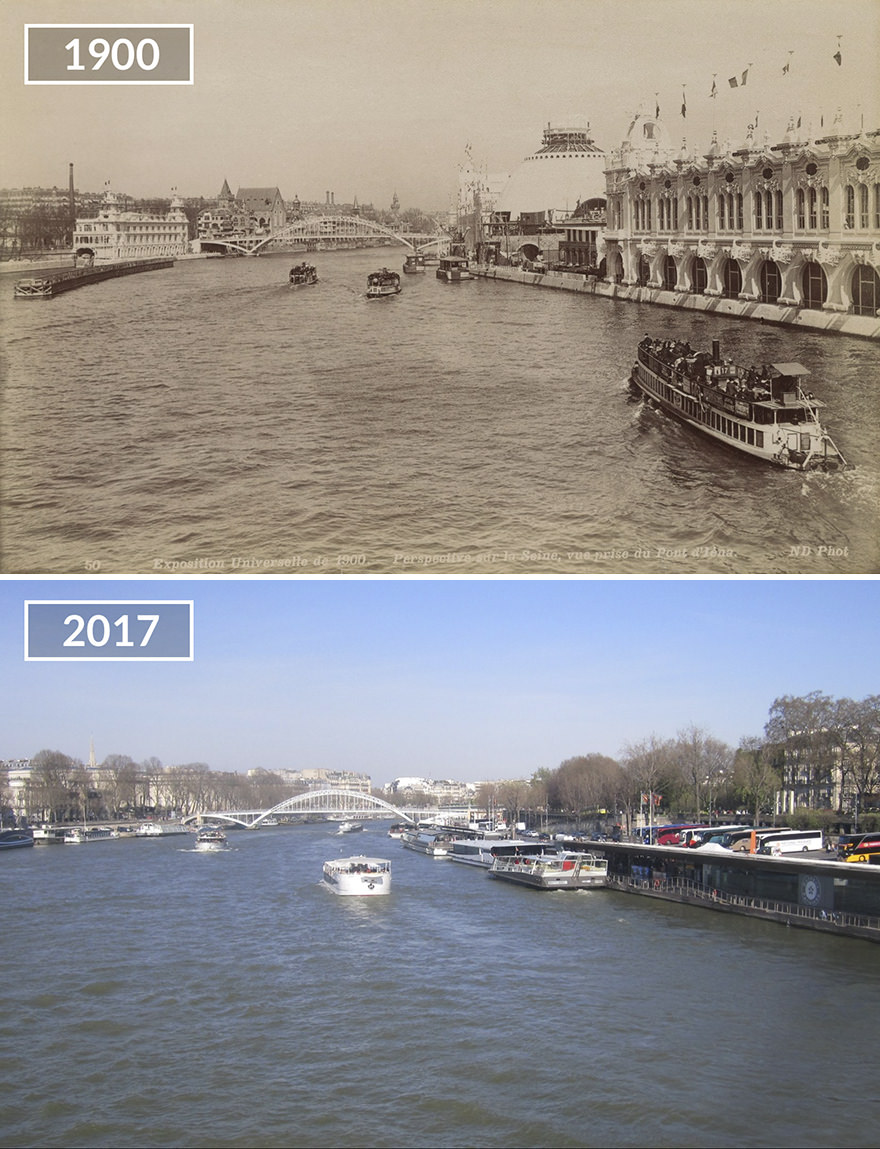 The building on the right side was a pavilion dedicated to trade and navigation. Behind it, one can see the “pavillon du Creusot” (the round-shaped building next to the bridge). Le Creusot is a French town famous for its metallurgy, and therefore the pavilion housed many exhibits and artifacts on the topic.