No, you aren’t looking at a fruit that has been painted with color-changing paint, but rather the fruit of the “Pollia condensata plant that ranges from Ethiopia to Angola and Mozambique where they are used as decoration.” Continue reading for one more picture and additional information. 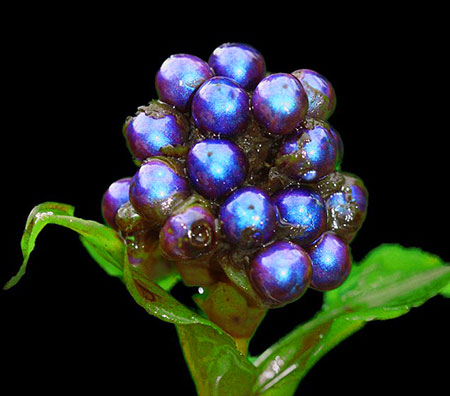 State-of-the-art microscopes showed its iridescent skin – meaning it changes colour according the angle at which it is observed – has no blue pigment. Its intense colour comes from the interaction of light with tiny fibres of cellulose strands stacked as layers of helixes within the cellular walls of the fruit’s skin.

The distance between these layers slightly varies from cell to cell – altering the reflected colour from each point and giving a stunning pixelated appearance as well as a luminous quality. Physicist Dr Silvia Vignolini and colleagues said light reflects either in a left or right direction from every cell of the fruit – a highly unusual feature for a single tissue.