While smartphones are slowly taking over the world, there are still some who prefer to use a classic alarm clock. These ten weird clock designs combine technology with style and innovation, starting with the “Shredder Clock” which won’t work unless you put some form of paper currency in it. Continue reading to see them all.

No, these aren’t gag gifts, but rather functional alarm clocks that look like real bombs, complete with detonation and defusing sequences. That’s right, only one of the four wires “stop the countdown when cut; the other two are decoys and do nothing while one wire will immediately ‘detonate’ the alarm.” Unfortunately, “the thrill will wear off if the wires had fixed purposes, which is why Krumpus made it so the the role of each wire is randomized each time the sequence is activated.”

Here’s a first: a real clock that tells time through actual knocks. Called the “Knock Clock”, this creation by Copenhagen Institute of Interaction Design students is set with knocks and tells time with a knocking sound. The clock tells you the time of day (to the quarter hour) after you knock on the top twice. Placing a hand over the sensor near the corner sets the alarm function. The alarm function also features – you guessed it – more knocking.

Built by Alan Parekh, this DIY gear clock isn’t just eye candy, it “uses a PIC 16F628A microcontroller to keep track of time and a stepper motor to physically move gears to represent time.” According to its creator, “this microcontroller has an internal oscillator however an external 20MHz crystal oscillator is being used since it will have to accurately keep track of time for weeks and months.”

To create this creative gun-operated alarm clock, gadget modder KipKay outfitted a SEGA phase “with five tilt sensors, arranged at different angles on a small circuit board.” A cable tethers the gun to the clock and carries your tilt and trigger signals to the clock’s time and alarm control button contacts.

Adafruit Industries’ MONOCHRON is an open-source clock kit that “has an default animated display, but is easily hackable to do whatever you wish – pictured above, retro arcade style table tennis for two.” Available now, priced at $80. The best part? The time changes whenever the clock “loses” — something tells us that gives one side at least a 59-to-1 advantage.

Called BAKON, this nifty alarm clock is designed so users can wake up to the smell of bacon, and then actually eat it too. Simply put, load the gadget up with a few strips of frozen bacon the night before, set the timer for 15-minutes before you’re ready to chow down, and you’re ready to go. 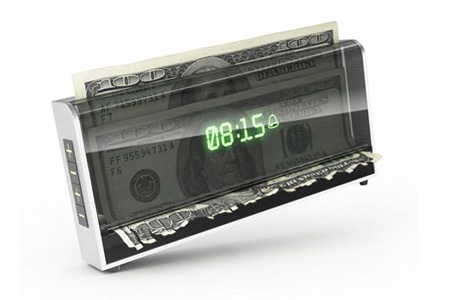 You know what they say, “time is money”. The “Shredder Clock” wants to ensure that none of your time is wasted, as it will begin shredding whatever currency you put in, if the alarm does not get manually shut off immediately — you won’t find a snooze button on this thing.

With some clever planning and the right parts, you too, can build a Pong Clock. Many have taken apart old laptops, created a custom enclosure / frame for the display, and downloaded a Pong Clock program that keeps time.

Aside from being the self-proclaimed “world’s biggest alarm clock”, this homemade creation is computer-controlled and designed to throw you out of bed, literally. For those with bad backs, be sure to wear a brace nightly to ensure you don’t end up with a strained muscle or two, should you decide to build one yourself.

No, there’s nobody inside this homemade clock, but rather an LCD that gives off the illusion of such a thing. That’s right, it boasts “a flatscreen that plays a 24 hour loop of this video by the artist watching his own clock somewhere and painstakingly erasing and re-writing each minute.”

Liu Bolin “The Invisible Man” Spotted in the Wild