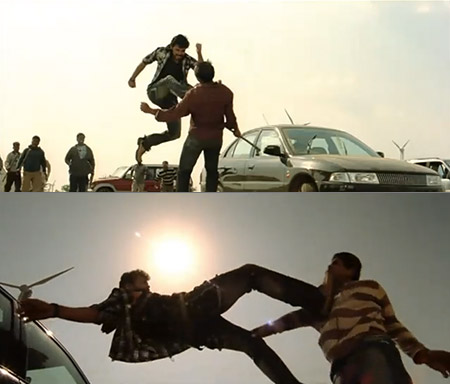 Have you ever watched an action scene in which the hero somehow takes on 100 bad guys, defies the laws of physics, and comes out the victor? If not, these five bizarre scenes from famous Bollywood movies should provide you with more than enough action. Continue reading to see them all.

In the late 1960s and early 1970s, romance movies and action films starred actors like Rajesh Khanna, Dharmendra, Sanjeev Kumar and Shashi Kapoor and actresses like Sharmila Tagore, Mumtaz and Asha Parekh. In the mid-1970s, romantic confections made way for gritty, violent films about gangsters and bandits. Amitabh Bachchan, the star known for his “angry young man” roles, rode the crest of this trend with actors like Mithun Chakraborty and Anil Kapoor, which lasted into the early 1990s. Actresses from this era included Hema Malini, Jaya Bachchan and Rekha.

Some Hindi filmmakers such as Shyam Benegal continued to produce realistic Parallel Cinema throughout the 1970s, alongside Mani Kaul, Kumar Shahani, Ketan Mehta, Govind Nihalani and Vijaya Mehta. However, the ‘art film’ bent of the Film Finance Corporation came under criticism during a Committee on Public Undertakings investigation in 1976, which accused the body of not doing enough to encourage commercial cinema. The 1970s thus saw the rise of commercial cinema in the form of enduring films such as Sholay (1975), which solidified Amitabh Bachchan’s position as a lead actor.

During the late 1980s and early 1990s, the pendulum swung back toward family-centric romantic musicals with the success of such films as Qayamat Se Qayamat Tak (1988), Maine Pyar Kiya (1989), Hum Aapke Hain Kaun (1994) and Dilwale Dulhania Le Jayenge (1995), making stars out of a new generation of actors (such as Aamir Khan, Salman Khan and Shahrukh Khan) and actresses. In that point of time, action and comedy films were also successful, with actors like Govinda and actresses such as Raveena Tandon and Karisma Kapoor appearing in popular comedy films, and stunt actor Akshay Kumar gaining popularity for performing dangerous stunts in action films.

The 2000s saw a growth in Bollywood’s popularity in the world. This led the nation’s filmmaking to new heights in terms of quality, cinematography and innovative story lines as well as technical advances in areas such as special effects, animation, and so on. Some of the largest production houses, among them Yash Raj Films and Dharma Productions were the producers of new modern films. The opening up of the overseas market, more Bollywood releases abroad and the explosion of multiplexes in big cities, led to wider box office successes in India and abroad.