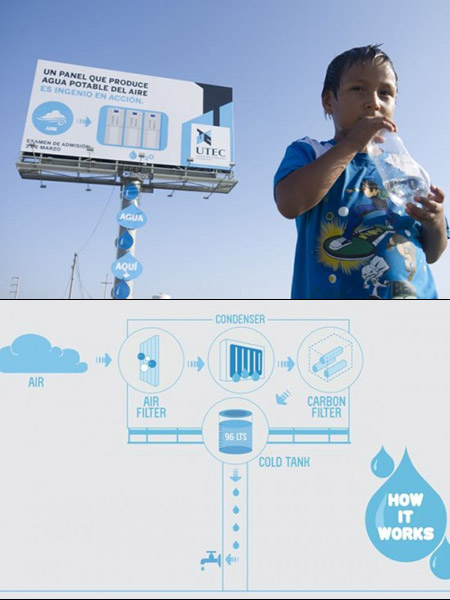 Researchers in Peru have created an innovative billboard that turns humidity in the air into potable drinking water. Located northern edge of the Atacama desert, the city of Lima and its surrounding villages receive only 0.51-inches of rain annually. The capital city has relied on drainage from the Andes mountains and runoff from melted glaciers for its drinking water needs, but due to climate change, the supply has been on a steady decline. The world’s first billboard that generates water from thin air consists of five primary components: it captures the humid air, runs it through an air filter into the condenser, to create water, which then passes through a carbon filter into one a central holding tank. All you need to do is turn on the faucet at the base of the billboard for a clean glass of water. It’s capable of producing up to 100 liters of potable water a day . Continue reading for more.

You haven’t seen a water gun, until you’ve seen this Gatling-style weapon. Featuring a 10-liter water tank, six barrels and a 40-foot firing range, this gun consists of 55 separate parts made from everyday objects. London native Alex Bygrave, who spent 50-years building the contraption, says: “I had to first break down the mechanics of how the Gatling gun worked, and then build it up using a mix of all sorts of components.”

We have seen the future of footwear, and it’s “Bionic Boots” by inventor Keahi Seymour, who has always been fascinated by the effortless speed and agility of ostriches. They can help users achieve speeds of up to 25 mph (40 kph). He says, “They are meant to make a human run faster, inspired by fast land animals. The boots are comprised of a carbon fiber composite exoskeleton, and also aircraft grade aluminum. So the lightest materials were applied to provide the most efficient form of transportation.”

Engineers in China have developed the “Air Umbrella”, a revolutionary new device that shoots blasts of air to shield you from rain. Shaped like a plastic microphone, it’s capable of producing horizontal gusts of air that repel raindrops, creating a dry, one meter wide circle around the user’s head. One caveat: the prototype has only a usage time of 30-minutes.

If you always find yourself glued to a phone, NoPhone may be just the gadget you need. Its makers describe the device as a “technology-free alternative to constant hand-to-phone contact that allows you to stay connected with the real world”, priced at just $12. Dutch designer Ingmar Larsen said that he conceived the idea as a joke along with his friends Van Gould and Ben Langveld. NoPhone measures 5.5-inches tall, 2.6-inches wide and 0.29-inches thick. They add: “With a thin, light and completely wireless design, the NoPhone acts as a surrogate to any smart mobile device, enabling you to always have a rectangle of smooth, cold plastic to clutch without forgoing any potential engagement with your direct environment. Never again experience the unsettling feeling of flesh on flesh when closing your hand.”

Rich Lee is a self-proclaimed “bodyhacker”, or a person who experiments with surgical implants or technological body-enhancements in order to expand human capacities. He was recently featured in the Humanity+ magazine for his headphone implants. He embedded a small magnet into his tragus – the small piece of cartilage directly outside the ear – and built a coil to be worn around the neck, which “creates a magnetic field causing the implant to vibrate and produce sound”. While the audio quality is nowhere near as good as what you get from regular earbuds, his system does have a series of advantages: he can listen to music anytime and anywhere he wants.

7 Cool and Creative Slippers That Geeks Would Love