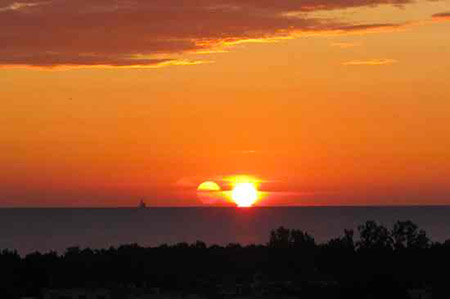 While the triple sunrise illusion may be slightly hard to spot in the image above, it basically shows 3 side-by-side suns. Nobody really knows what exactly created this double mirage-like illusion, but some have suggested that it may be any number of things such as standard reflections, atmospheric lensing or something else entirely.

Like many of the other occurrences in this feature, multiple fogbows are just an illusion. However, the illusion disappears when you get too close. They are created when sunlight back-scatters off a cloud passing below the peak of the mountain and hills. These ‘supernumeraries arcs’ also occur in rainbows, which leads to the double rainbow phenomenon.

In a nutshell, the term roll cloud refers to a low, horizontal, tube-shaped, and relatively rare type of arcus cloud. These usually appear to be “rolling” about a horizontal axis. They are a solitary wave called a soliton, which is a wave that has a single crest and moves without changing speed or shape. This happens when cold air rushes out of a downdraft from a storm front, lifting warm air which cools and sometimes forms this type of cloud.

In the Earth’s atmosphere, gravity waves are a mechanism for the transfer of momentum from the troposphere to the stratosphere. They’re generated in the troposphere by frontal systems or by airflow over mountains. These clouds got their name because not only do they look like waves, but waves in motion.

You Won’t Believe This Isn’t a Human Eye