The Google Pixel 6a 5G Smartphone may be the best mid-range device for your money at this current time, and you can get one for $399 shipped after clipping the $37.52 on-page coupon, today only, originally $449. If you’re worried about battery life, especially when it’s powered by the Google Tensor, you’ll be happy to know that Adaptive Battery learns your favorite apps, so the device can be used for over 24-hours on a single charge. Product page. 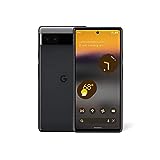 Google’s Titan M2 chip and Tensor security core combine to give the Pixel 6a an extra layer of security. The former is basically a RISC-V processor paired with its own memory, thus bridging security functions between multiple CPU cores and threads. You’ll also be able to translate 11 languages, interpret face-to-face conversations, and even translate signs with the camera. For translating sign language, you’ll need this software developed by college students.