Photo credit: Oli G.
The Lamborghini Urus concept made its debut at the 2012 Beijing Auto Show and is powered by a twin-turbocharged 4.0L V8, a modified version of Audi’s 4.0 L V8, generating 641 hp, mated to an 8-speed ZF 8HP automatic transmission. German-based tuner HGP wanted to make this SUV a lot faster by equipping it with their Stage 2 upgrade kit, which includes larger turbos as well as a new air intake, to boost output to 947 hp and 922 lb-ft of torque.Read more for a video and additional information.

If you don’t need nearly 1,000 hp for daily driving, HGP also offers a Stage 1 kit that’s basically just modified ECU software that increases power to 781 hp and 752 lb-ft of torque. In the test drive video above, the Stage 2 Urus manages to complete the quarter mile in a mere 10.54 seconds, which is blistering fast for any SUV. 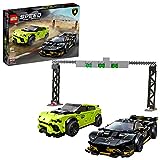 Futuristic Spacecraft Could be Used to Find the Mysterious Planet Nine