The lion’s mane jellyfish (above) is the largest known species of jellyfish. Its range is confined to cold, boreal waters of the Arctic, northern Atlantic, and northern Pacific Oceans. Divers may also find them in to the south-western part of the Baltic Sea (where it cannot breed due to the low salinity). Similar jellyfish, which may be the same species, are known to inhabit seas near Australia and New Zealand. Continue reading for more. 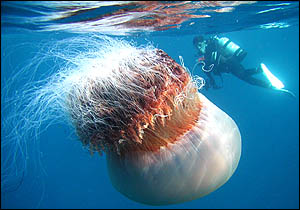 Although capable of attaining a bell diameter of over 2 metres (6 ft 7 in), these jellyfish can vary greatly in size; those found in lower latitudes are much smaller than their far northern counterparts with bell about 50 centimetres (20 in) in diameter. 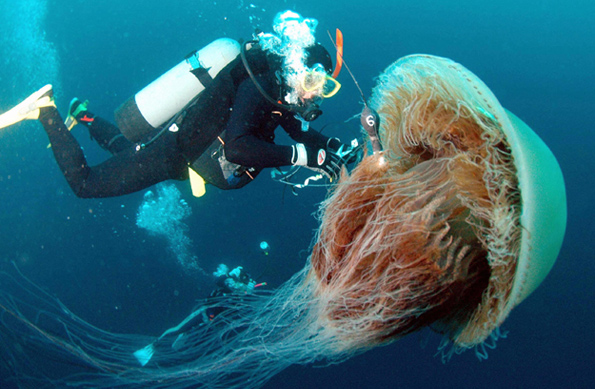 As coldwater species, this jellyfish cannot cope with warmer waters. The jellyfish are pelagic for most of their lives but tend to settle in shallow, sheltered bays towards the end of their one-year lifespan. In the open ocean, lion’s mane jellyfish act as floating oases for certain species, such as shrimp, medusafish, butterfish, harvestfish, and juvenile prowfish, providing both a reliable source of food and protection from predators.

3. Leatherback Turtle is a Deadly Predator 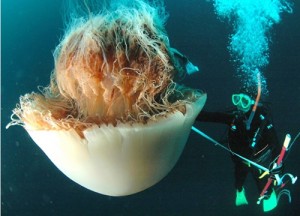 Predators of the lion’s mane jellyfish include seabirds, larger fish such as Ocean sunfish, other jellyfish species, and sea turtles. The Leatherback sea turtle feeds almost exclusively on them in large quantities during the summer season around Eastern Canada. The jellyfish themselves feed mostly on zooplankton, small fish, ctenophores, and moon jellies.

2. Can Still Sting After Breaking Up 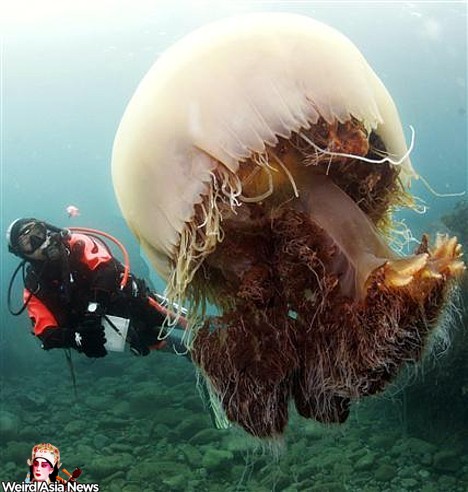 On July 21, 2010, around 150 people are thought to have been stung by the remains of a lion’s mane jellyfish that had broken up into countless pieces in Rye, New Hampshire, in the United States. Considering the size of the species, it is possible that this mass incident was caused by a single specimen.

At 37 m (120 ft) in length, the largest known specimen was longer than a blue whale and is considered one of the longest known animals in the world. This title, however, may be contested: in 1864, a bootlace worm (Lineus longissimus) was found washed up on a Scottish shore that was 55 m (180 ft) long. But because bootlace worms can easily stretch to several times their natural length, it is possible the worm did not actually grow to be that length.

Bose OE2i Headphones with Microphone Get 56% Reduction to $79.96 Shipped, Today Only

Laser Cutters Are Usually Required, But This Japanese Artist Does it All by Hand