Technically speaking, a geoglyph refers to a large design or motif (generally longer than 4m) produced on the ground, and typically formed by clastic rocks or similarly durable elements of the landscape, such as stones, stone fragments, live trees, gravel, or earth. Above, we have one of the most famous, the Nazca Lines. Continue reading for more. 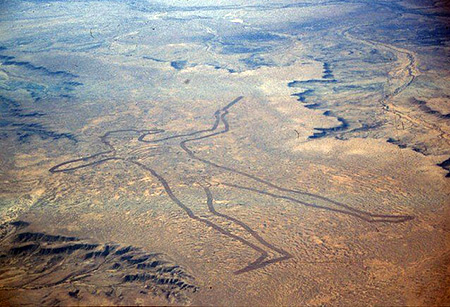 This gigantic geoglyph is located in the Australian outback, and shows an indigenous man hunting birds or wallabies with a throwing stick. It’s currently the second largest known geoglyph in the world, discovered in 1998. At the time of its discovery, there was only one track entering and one track exiting the site, and no footprints or tire marks could be found. No one has come forward claiming responsibility for creating the Marree Man. 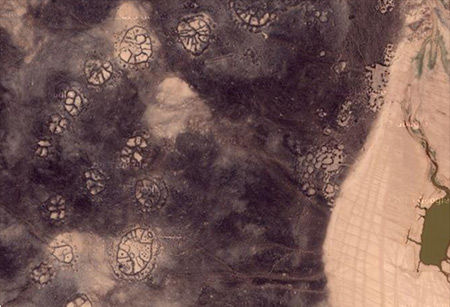 These extensive geoglyphs were discovered uring a recent aerial photography expedition, scattered across Saudi Arabia, Syria and Jordan, that depict an array of “wheels,” among other motifs. They were named the “Works of the Old Men,” and their features are believed by some to be several thousand years old, which would make them far older than the more famous Nazca Lines. There is no agreement on one key question: Why were they built? 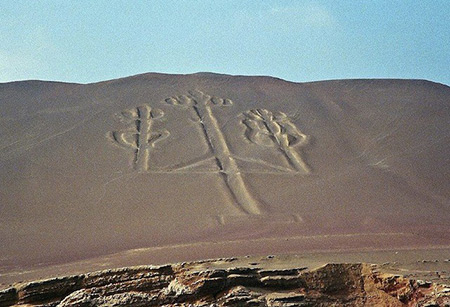 The Paracas Candelabra is a stunning geoglyph that can be found on the northern face of the Paracas Peninsula at Pisco Bay in Peru, and is believed to date to around 200 B.C. Its purpose and meaning are unknown, though local legend suggests it represents the lightning rod or staff of the god Viracocha, who was worshipped throughout South America. 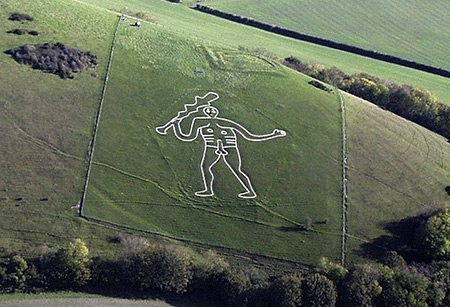 What sets Cerne apart from the many other geoglyphs mentioned on this list, located near the village of Cerne Abbas in Dorset, England, is that it’s likely not a prehistoric creation. The earliest mention of its existence occurs as recently as the 17th century. Even so, its creation and meaning remain shrouded in mystery. 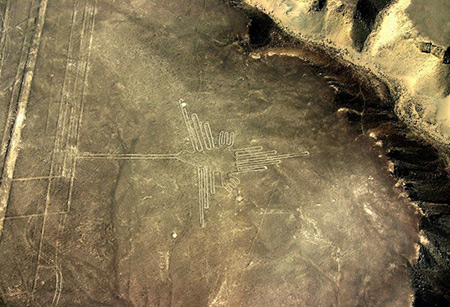 One of the most famous of geoglyphs, the Nazca Lines can be found in the Nazca Desert in southern Peru and have been declared a UNESCO World Heritage Site. Scholars believe they were created sometime between 200 B.C. and 500 A.D. They aren’t random lines, but rather hundreds of figures, many of which depict animals such as hummingbirds, sharks, monkeys, spiders, orcas, lizards and even an alleged “spaceman.” The purpose and meaning of the Nazca Lines remain a mystery today, though a number of theories have been posited.

12 Weird and Bizarre (Yet Real) Cars Spotted on the Streets