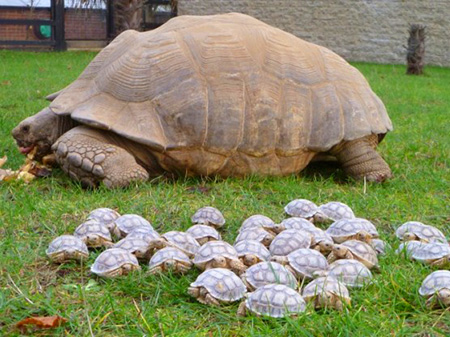 Giant tortoises are essentially characteristic reptiles of certain tropical islands. They often reach enormous sizes, weighing as much as 300 kg and can grow to be 1.3 m (4 ft) long. These reptiles live, or lived, in the Seychelles, the Mascarenes and the Galapagos. Continue reading to see more.

During the 16th and 17th centuries, the Galapagos were frequented by buccaneers preying on Spanish treasure ships. Filling a ship’s hold with tortoises was an easy way to stock up on food, a tradition that was continued by whalers in the centuries that followed: “‘whaling skippers were almost lyrical in their praise of tortoise meat, terming it far more delicious than chicken, pork or beef’. They said the meat of the giant tortoise was ‘succulent meat and the oil from their bodies as pure as butter, but best of all, the giants could hibernate in a ship’s damp for a year or more.’

Today, only one of the species of the Indian Ocean survives in the wild, the Aldabra giant tortoise (two more are claimed to exist in captive or re-released populations, but some genetic studies have cast doubt on the validity of these as separate species) and 11 subspecies in the Galapagos.

Today, the world’s largest population inhabits Aldabra Atoll in Seychelles, where there are approximately 150,000 individuals. Although appearing similar, the tortoises represent separate branches of evolution. The Seychelles and Mascarenes tortoises derive from nearby Madagascar, while the Galapagos tortoises came from nearby Ecuador.

Giant tortoises are among the world’s longest-living animals, with an average lifespan of 100 years or more. The Madagascar radiated tortoise Tu’i Malila was 188 at death in Tonga in 1965. Harriet (initially thought to be one of the three Galapagos tortoises brought back to England from Charles Darwin’s Beagle voyage but later shown to be from an island not even visited by Darwin) was reported by the Australia Zoo to be 176 years old when she died in 2006. Also, on 23 March 2006, an Aldabra giant tortoise named Adwaita died at Alipore Zoological Gardens in Kolkata.

He was brought to the zoo in the 1870s from the estate of Lord Robert Clive and is thought to have been around 255 years old when he died. Around the time of its discovery, they were caught and killed for food in such large quantities that they became virtually extinct by 1900. Giant tortoises are now under strict conservation laws and are categorised as threatened species.