Colliding galaxies are common in galaxy evolution. Due to the extremely tenuous distribution of matter in galaxies, these are not collisions in the normal sense of the word, but rather gravitational interaction. Above, two antenna galaxies are colliding and dark dust pillars mark massive molecular clouds are being compressed during the galactic encounter, causing the rapid birth of millions of stars. Continue reading to see more. 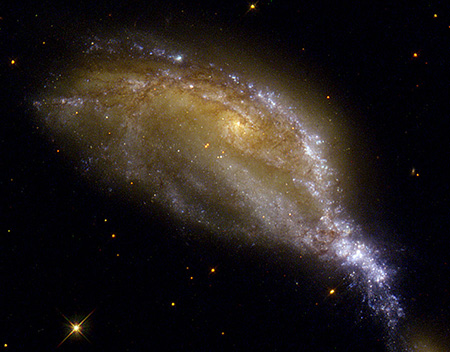 Galaxies don’t normally look like this. NGC 6745 actually shows the results of two galaxies that have been colliding for only hundreds of millions of years. Just off the above digitally sharpened photograph to the lower right is the smaller galaxy, moving away.

The larger galaxy, pictured above, used to be a spiral galaxy but now is damaged and appears peculiar. Gravity has distorted the shapes of the galaxies. Although it is likely that no stars in the two galaxies directly collided, the gas, dust, and ambient magnetic fields do interact directly. In fact, a knot of gas pulled off the larger galaxy on the lower right has now begun to form stars. NGC 6745 spans about 80 thousand light-years across and is located about 200 million light-years away. 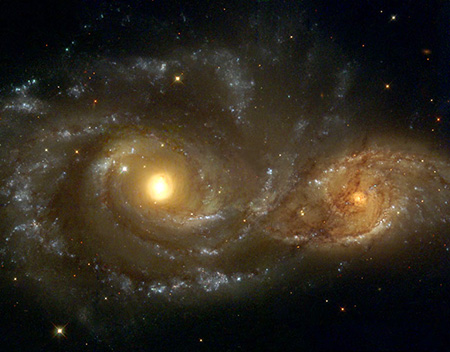 Billions of years from now, only one of these two galaxies will remain. Until then, spiral galaxies NGC 2207 and IC 2163 will slowly pull each other apart, creating tides of matter, sheets of shocked gas, lanes of dark dust, bursts of star formation, and streams of cast-away stars.

Astronomers predict that NGC 2207, the larger galaxy on the left, will eventually incorporate IC 2163, the smaller galaxy on the right. In the most recent encounter that peaked 40 million years ago, the smaller galaxy is swinging around counter-clockwise, and is now slightly behind the larger galaxy. The space between stars is so vast that when galaxies collide, the stars in them usually do not collide. 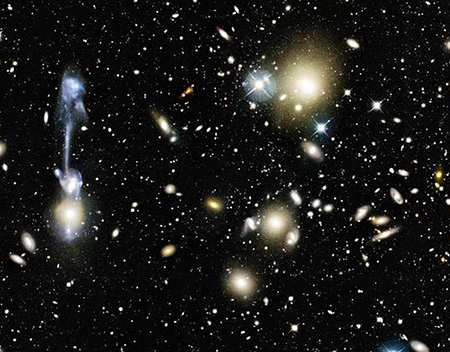 What is a guitar doing in a cluster of galaxies? Colliding. Clusters of galaxies are sometimes packed so tight that the galaxies that compose them collide. A prominent example occurs on the left of the above image of the rich cluster of galaxies Abell 1185. There at least two galaxies, cataloged as Arp 105 and dubbed The Guitar for their familiar appearance, are pulling each other apart gravitationally.

Most of Abell 1185’s hundreds of galaxies are elliptical galaxies, although spiral, lenticular, and irregular galaxies are all clearly evident. Many of the spots on the above image are fully galaxies themselves containing billions of stars, but some spots are foreground stars in our own Milky Way Galaxy. Recent observations of Abell 1185 have found unusual globular clusters of stars that appear to belong only to the galaxy cluster and not to any individual galaxy. Abell 1185 spans about one million light years and lies 400 million light years distant. 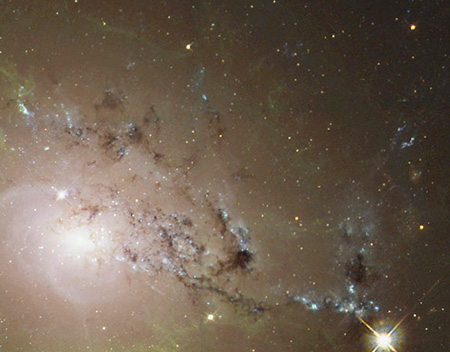 In NGC 1275, one galaxy is slicing through another. The disk of the dusty spiral galaxy near the image center is cutting through a large elliptical galaxy, visible predominantly on the lower left. Galaxies can change significantly during a collision like this, with gravitational tides distorting each galaxy and gas clouds being compressed and lighting up with new star formation.

Galaxy collisions occur in slow motion to the human eye, with a single pass taking as much as 100 million years. NGC 1275 is a member of the Perseus cluster of galaxies that lies about 230 million light years away toward the constellation of Perseus. Each galaxy spans about 50,000 light years across. The above picture is a composite of images taken by the Hubble Space Telescope in 1995 and 2001.

1. Cosmic Collisions in a Galaxy Cluster 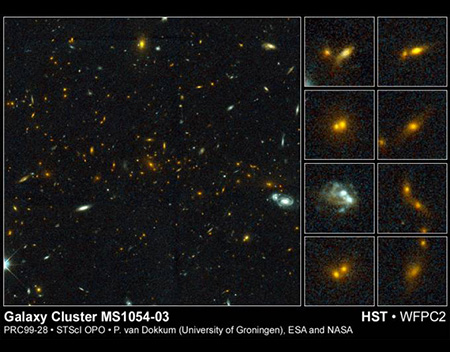 Hundreds of galaxies appear as faint smudges of light in this Hubble Space Telescope picture of galaxy cluster MS1054-03. Eight billion light-years away, the cluster is among the most distant known clusters of galaxies and is now reported to contain the largest number of colliding galaxies ever found in a cluster. Examples of these truly cosmic collisions are shown in the insets at the right.

Disrupted by gravitational effects, the colliding galaxies are thought to merge over a billion years or so to form larger galaxies – a theory of galaxy formation which seems to be borne out by these results. Though galaxy collisions appear to have occurred much more frequently in the distant, early Universe, they are still seen to happen in the nearby, “close-to-present” Universe.

Colliding may lead to merging. This occurs when two galaxies collide and do not have enough momentum to continue traveling after the collision. Instead, they fall back into each other and eventually merge after many passes through each other, forming one galaxy. If one of the colliding galaxies is much larger than the other, it will remain largely intact after the merger; that is, the larger galaxy will look much the same while the smaller galaxy will be stripped apart and become part of the larger galaxy. Through-passes are less disruptive of galaxy shapes than mergers in that both galaxies largely retain their material and shape after the pass.

Galaxy collisions are now frequently simulated on computers, with all the realistic physics, including gravity forces, gas dissipation, star formation and feedback. Dynamical friction slows down galaxy pairs, which may or may not merge at some point, according to the initial relative energy of the orbits. A simulated library of galaxy collisions can be found at the Paris Observatory website: GALMER.