5. Ash and Lightning Above an Icelandic Volcano 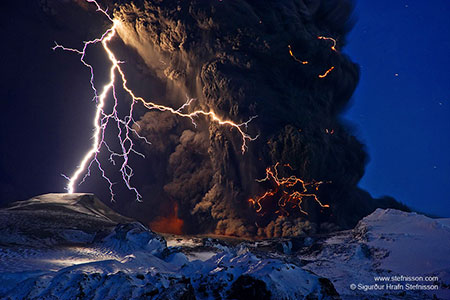 The Eyjafjallajokull volcano in southern Iceland began erupting on 2010 March 20, with a second eruption starting under the center of a small glacier on 2010 April 14. Neither eruption was unusually powerful. The second eruption, however, melted a large amount of glacial ice which then cooled and fragmented lava into gritty glass particles that were carried up with the rising volcanic plume. Pictured above during the second eruption, lightning bolts illuminate ash pouring out of the Eyjafjallajpkull volcano. 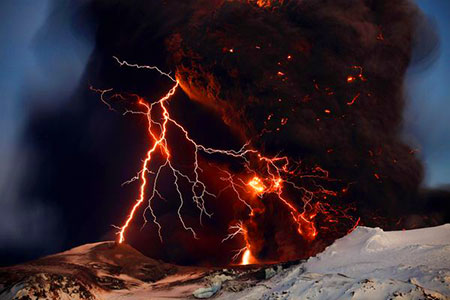 Surprisingly, it wasn’t the lightning but rather the widespread ash clouds from the April 2010 eruption of Iceland’s Eyjafjallajokull volcano (pictured) that eventually grounded a hundred thousand flights. The radio emissions from volcanic lightning might provide a tool for quickly assessing the amount of ash in a volcanic plume occurring at night or in inclement weather. 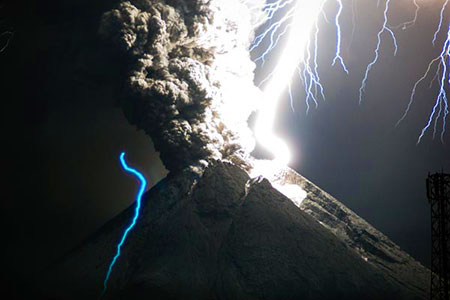 In this breathtaking photo, a giant bolt of lightning strikes Indonesia’s Mount Merapi in 2010. According to McNutt: “We sometimes refer to [volcanic plumes] as dirty thunderstorms. But there’s a lot more lightning in the ash plumes than is visible in the pictures. “That’s because ash clouds are opaque.” 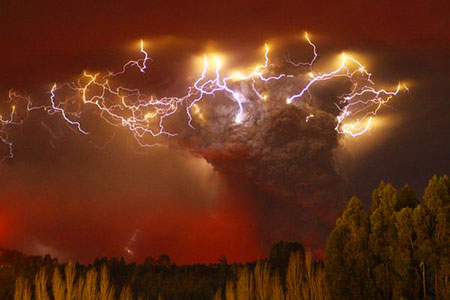 For those who don’t know, there are at least two types of volcanic lightning, according to a radio-mapping study. One occurs at the mouth of the volcano, and the other – as pictured above Chile’s Puyehue-Cordon Caulle volcano complex – electrifies the heights of the plume, possibly as rising water becomes a mix of droplets and ice-coated ash particles. 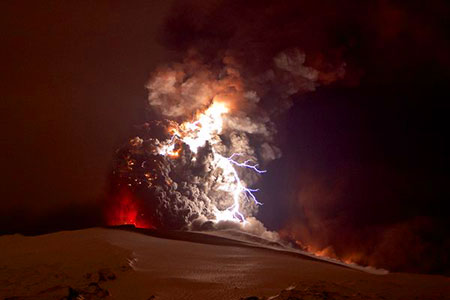 One researcher states that with the right instruments, “you can see electrical activity right at the onset of the eruption inside the crater.” These otherwise invisible lightning bolts are produced by the other mechanism for static-charge generation: the shattering of rocks thrust skyward in an eruption.

Guy Lifts Glider to Edge of Space, Captures This Amazing Image of Earth