Let’s face it, LEGO sets are fun to put together, but when it comes time to clean everything up, sorting the leftover pieces definitely isn’t the most enjoyable task. Inventor Daniel West has just the solution. This LEGO enthusiast put his engineering skills to work by building the world’s first universal LEGO sorting machine that uses an AI-powered neural network to identify, classify and organize the pieces more efficiently than a human ever could. Read more to see it in-action.

The universal LEGO sorting machine is made of 10,000 bricks and took Daniel two years to design and build. It’s powered by six Lego motors, nine servo motors to run the conveyor belts, agitators that transport the pieces, brick-by-brick, to a video camera, and then a Raspberry Pi. The tiny computer processes the video feed and streams the data directly to a laptop running an application called a convolutional neural network. This AI-driven software compares each piece to a database containing 3D models of every LEGO piece ever created before matching the piece to a part number and sending that data back to the machine, which properly dumps it into one of the eighteen sorting buckets. 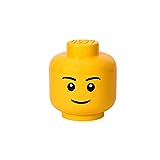