During World War II, massive searchlights were used to detect and track enemy aircraft, but most have never seen one in-action. They normally came in 60, 150 and 200cm sizes, all of which were capable of receiving signals from a control station. An operator would then switch the searchlight on to start the arc burning, while also ensuring that the carbons used to create it are burning correctly and that the beam is focused. Read more for a video and additional information.

The one you see in this video features a 150 centimeter parabolic glass reflectors with an output of 990 million candelas, all powered by a 24-kilowatt generator, based around a 51-horsepower (38 kW) 8-cylinder engine. This gives the searchlight a current of 200 amperes at 110 volts and was attached to the generator by a 200-meter cable. It could detect aircraft that were 5-miles away at an altitude of between 13,000-16,000 ft and be traversed 360° as well as elevated from -12° through the vertical to -12° on the other side. 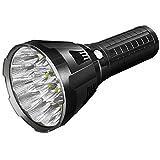 Cave Explorers Reach the Bottom of Yemen’s “Well of Hell” for the First Time, Here’s What They Found