Arcade1UP has just revealed an all-new X-Men vs. Street Fighter arcade cabinet, and it faithfully replicates the original machine found all over the world back in the late 90s. This cabinet also includes X-Men: Children of the Atom, Marvel vs Capcom: Clash of Super Heroes, and X-Men: Mutant Apocalypse. It goes on sale this fall, priced at $399. Read more for a video and additional information.

If you’ve never played X-Men vs. Street Fighter, this title features Street Fighter-like gameplay, but incorporates dual-character selection and tag team-based combat. Each player starts off by selecting two characters to compete in a one-on-one battle and are given the ability to switch between their characters at any point during the match. 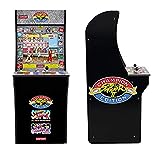 [However] the $399 price tag is a lot to ask for from most people. Arcade1Up’s 3/4-scale cabinets are awesome machines, but they’re only for those who are most passionate about the featured games,” said the company.