Tracking shots refer to any shot where the camera follows backward, forward or moves alongside the subject being recorded. In the film industry, the camera is typically mounted on a dolly that is then placed on rails, while a handheld steadycam or gimbal may also be used for smaller scale productions. The camera is then pushed along the track during filming of the scene or moved manually when using a handheld rig. Read more to see what happens when a professional drone pilot uses a quadcopter to create a tracking shot inside a bowling alley.

Called “Right Up Our Alley,” this short film takes place at Bryant Lake Bowl & Theater in Minneapolis and the drone is piloted by Jay Byrd Christensen. The footage begins just outside the bowling alley before swooping in to give viewers an up-close view of the lanes, around patrons / machinery as well as a short tour in the kitchen, bar, and theater. 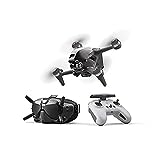